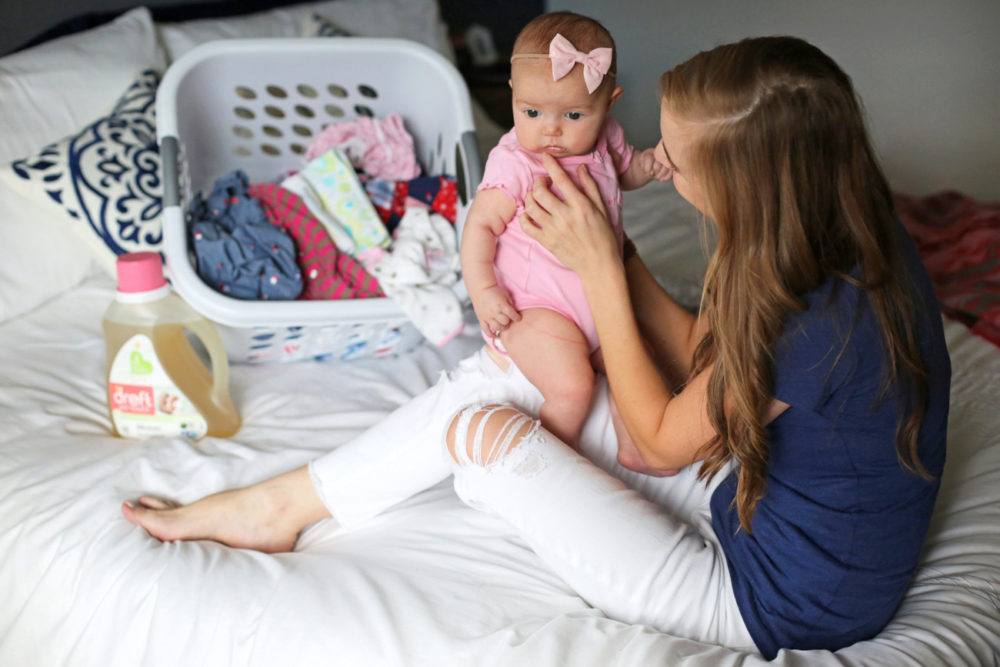 This post is sponsored by Dreft, the #1 pediatrician-recommended baby detergent brand

I’ve mentioned before what a huge surprise it was to me when Ani was born and she looked absolutely nothing like Ella.

Subconsciously, I guess I’d assumed that, since I was having a second girl, she’d basically be a second Ella (this sounds ridiculous when I type it out).

But from those first moments, she was 100% her own baby. She had that distinctive red-hair that had the nurses commenting about it even as they cleaned her up, her face looked very different, and she had a completely different personality than Ella.

As she’s grown, that’s continued to be the case. Parenting her has been a totally different experience than with Ella – Ella is highly motivated by consequences, while Ani could not care less. Ani is a screamer, which Ella never has been. Ani loves to snuggle and has since the first days of her life, which was not the case with Ella. Ani has always been good at entertaining herself, while Ella wanted constant interaction. The differences go on and on.

When Star was born, we were more prepared to have a child that was different from the first two, and indeed Star looks very little like either of her older sisters to me, and her personality is also quite unlike Ani or Ella.

While we were waiting to find out if our fourth child would be a boy or a girl, Bart told me, “Even if this baby is a girl, I’ll have zero expectations about what she’ll be like, since the other three are all so different.”

And indeed, Tally has been her own little person from the beginning.

One thing that was new this time around is that Tally is much more sensitive than any of the girls have been. The other three girls never seemed bothered by anything I ate, but within the first week or so of Tally’s life, it seemed clear that she did not care for dairy.

While I can still eat butter and cheese or things with milk or yogurt cooked in them, any amount of plain milk, yogurt, or ice cream makes her furious.

Two weeks ago, after nearly three months of not eating any of those items, I had about four sips of milkshake when our family went out for dinner when my parents were in town.

It was such a minuscule amount, plus she’d been so unbothered for so many weeks, that I figured it probably wouldn’t matter a bit.

By the next afternoon, she was so fussy and unhappy that I couldn’t put her down for more than a minute at a time. She wanted to be held constantly, but couldn’t get comfortable. She didn’t want to eat, she couldn’t seem to settle into a real nap, and she just whimpered and cried for hours.

Clearly, I’ll be off dairy for a while longer.

Since I’d never had to cut anything out of my diet while nursing before, this has been a whole new ballgame for me.

Similarly, I was unprepared for a baby with sensitive skin.

I remember that, in the first weeks of her life, her face was covered in baby acne. My other babies had mostly had beautiful soft faces, and it was heartbreaking to see Tally’s face looking so rashy and angry.

As all the dairy worked its way out of my system, her skin cleared up, but I’ve been much more aware of what I use on her skin or what touches her body than I’ve ever had to be before.

I’ve always used the same detergent for babies that I’ve used for the rest of the family, but suddenly, here on baby #4, I’m realizing why detergent formulated for babies and their gentle skin exists.

Before Tally, I was familiar with Dreft, which is the #1 pediatrician-recommended baby detergent brand, but I was suddenly VERY aware of what a difference it made. 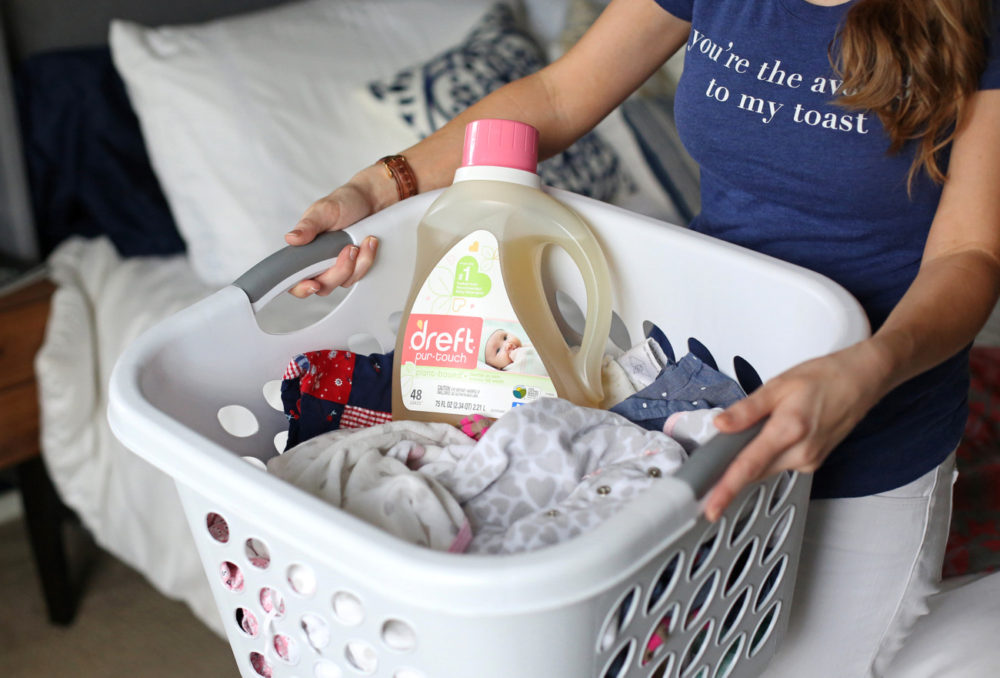 The timing was good too, because just as I was having a new baby, Dreft released their new detergent, Dreft purtouch, which is a 65% plant based hypoallergenic detergent meant to be super gentle. It’s free of dyes, chlorine, phosphates, ethanolamine, and optical brighteners, but still removes up to 99% of baby stains (along with more sensitivity, Tally also spits up WAY more than any of my other children ever have, so we have lots of stains

I also abruptly realized why you’re supposed to pre-wash your baby’s clothing. I’ll admit that I’ve never actually done that for any of my previous babies, and with Tally, all her clothing were basically hand-me-downs, which means they’d been washed a million times before they got to her.

But now I understand that washing out excess dye and processing chemicals from new clothing makes a big difference for new babies, and 9 out of 10 dermatologists say you should pre-wash baby clothing to protect your baby’s skin.

(And watching this cute little video made me think two things – first, I want a cute little neighborhood store like that near me and two, pre-washing baby clothing is a darn good idea).

Plus, pre-washing baby clothing is just a nice way to feel prepared for your little one to come home (and a good chance to marvel at how TINY newborns are. Even now, 12 weeks after her birth, I look at the newborn clothing and think, “I can’t believe she fit into that!”).

There’s so many things you can’t prepare for – what your baby will look like, what their personality will be like, and how they respond to the world around them. No matter how many babies you’ve had before, there’s no way to know who that new little one will be until they actually arrive.

But one thing you can do to prepare is pre-washing baby clothing and making sure all those tiny outfits are clean and ready to dress that perfect new little baby in when they arrive. 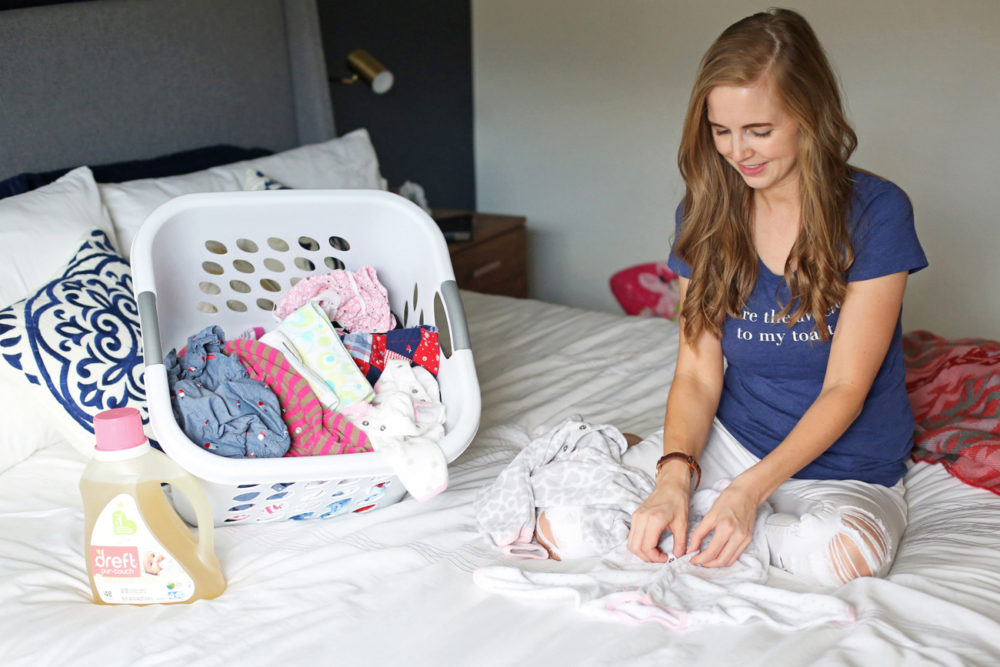 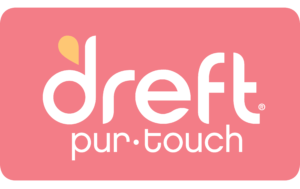