These are mysteries, yes, but they’re a little more than that too – there are puzzles and clues all along the way for the reader to solve (Escape from Mr. Lemoncello’s Library is probably one of the most current popular examples of this kind of book!).

If you have a child who loves the Mr. Lemoncello’s Library series, here are some other puzzle solving books they might enjoy too! 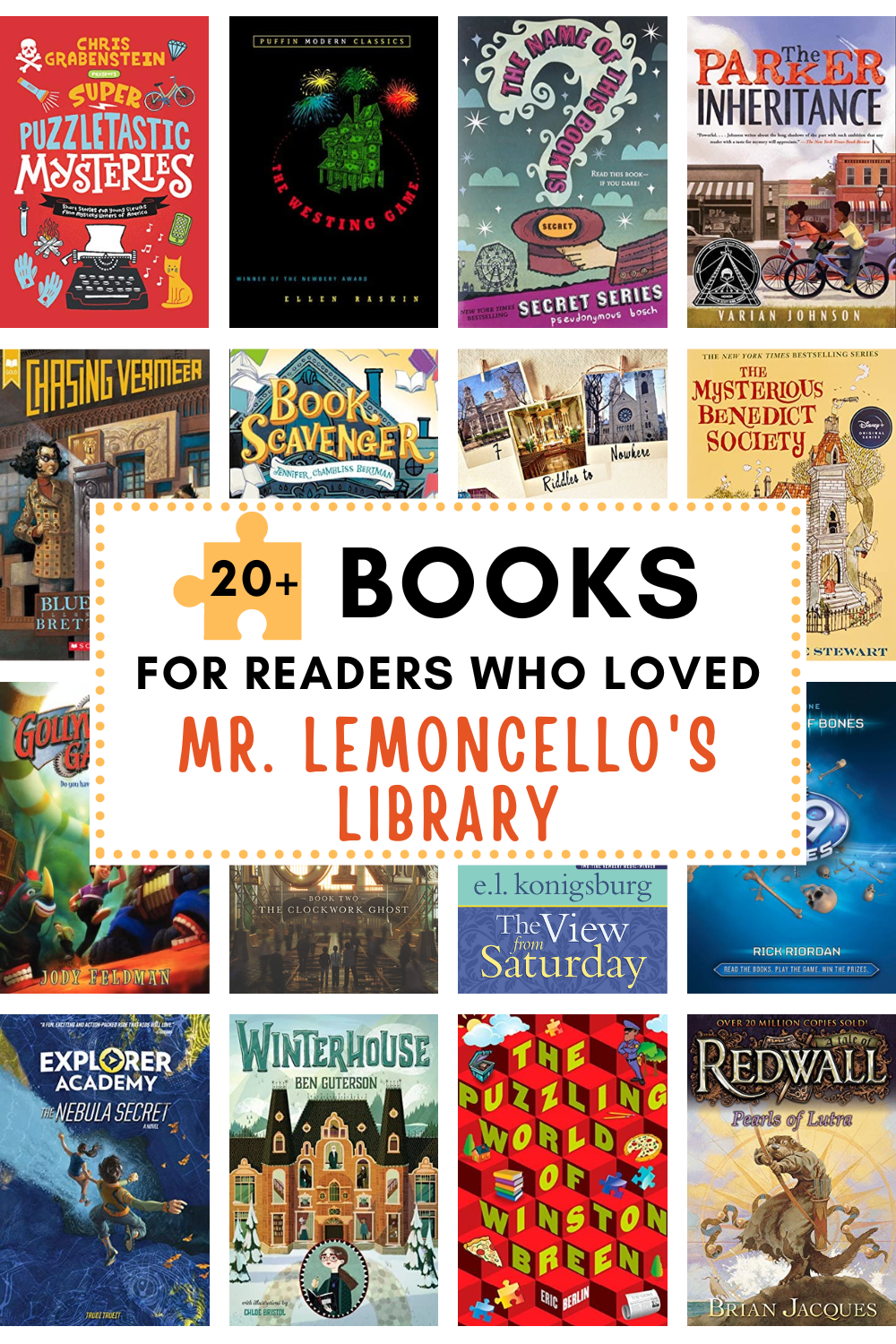 The Westing Game by Ellen Raskin
This classic Newbery-winning mystery begins when sixteen strangers are summoned to the will reading of Samuel W. Westing, a well-renowned millionaire and game player. Anyone of these sixteen people could end up with his fortune, but only if they could find the answer to the confusing and mysterious game he has them take part in.

Click Here to Start by Denis Markell
This would be a fantastic read for a video game lover! Ted is dropped into his own real-life escape room when his uncle leaves him an inheritence treasure in his house. With the help of two friends, he must use all of his video game skills to win the greatest game he has ever played. He must be careful, though, because someone dangerous is not far behind.

Chasing Vermeer by Blue Balliett, illustrated by Brett Helquist
4 book series
Some very unexplainable things are happening. Both Petra and Calder are experiencing these bizarre events and are brought together when a famous Vermeer painting disappears. They are now caught in the middle of an art scandal and must figure out how to wipe their names from the suspect list.

Mysterious Benedict Society by Trenton Lee Stewart
4 book series
I read this book back when I was a school librarian and have been a fan ever since. We listened to the whole 13+ hour audiobook in the car and my two older girls both LOVED it. As soon as we finished, Ella checked out the rest of the series and listened to them in a week (oh, to have that much listening time. . . ). The book begins with a strange ad in the newspaper asking super smart children to apply and when four children pass the test put before them. Now their job is to go on a secret mission at a mysterious school called the Learning Institute for the Very Enlightened, and puzzles, tests, and riddles will be everywhere they turn. The television series on Disney+ is also REALLY great.

7 Riddles to Nowhere by A.J. Cattapan
Kam and several of his friends try to be the first to solve the riddles that will give him enough money to save his Catholic school, which is slated for closure. In the process, they’ll have to outwit competitors, including the school’s biggest bully, navigate Chicago streets and public transportation, and use their knowledge to devise the correct answers.

Winterhouse by Ben Guterson
3 book series
This trilogy is set in a magical hotel full of secrets and orphan Elizabeth is sent there by her evil aunt and uncle. In it’s massive library she discovers a magical book of puzzles. This book holds the answers to the mystery involving the hotel’s owner. Will Elizabeth be able to unlock the mystery, even when she realizes that she may be connected?

The Parker Inheritance by Varian Johnson
This Coretta Scott King Author Honor book is very reminiscent of The Westing Game. Candice, a puzzle expert, spends the summer in South Carolina with her mom after her parents’ divorce. They stay in her grandmother’s old house and Candice finds a letter in the attic about a lost fortune. Her grandmother once attempted to gather the clues and find the money, but in the process she lost her job and was shamed for her foolishness. Candice, along with her new friend, Brandon take it upon themselves to solve the mystery and restore her grandmother’s reputation.

Super Puzzletastic Mysteries by Chris Grabenstein
From the author of Mr. Lemoncello’s Library himself, and other members of the Mystery Writers of America, including some favorites like James Ponti and Stuart Gibbs, this anthology of 20 mystery short stories invites readers to try to unravel the riddles themselves. The answers to each riddle is included in the back. This would be a fantastic way to sample different authors’ writing styles if you have a reader just getting into mysteries.

Book Scavenger by Jennifer Chambliss Bertman
3 book series
I’m pretty sure I’ve checked this one out from the library but never actually cracked it open (story of my life). Emily has moved to San Francisco and can’t wait to meet Garrison Griswold who created Book Scavenger (a game where books are hidden around the country and there are clues to locate them. But when she discovers that Griswold is in a coma after an attack, she takes it on herself to figure out what Griswold’s newest game was going to be.

Who Stole the Wizard of Oz? by Avi
Toby’s twin sister, Becky, is accused of stealing The Wizard of Oz from the library. After being questioned by the police, Becky decides to discover who the thief was and make clear that she had nothing to do with the robbery. With the disappearance of 4 other books, they will soon figure out these books have the leading clues to what they suspect is a treasure. The mystery takes them all over town and through five classic children’s books. I mean, a mystery where the clues are hidden in classic children’s books? Count me in!

Explorer Academy by Trudi Trueit
7 book series
Cruz begins training at the Explorer Academy, an elite school for explorers. But for Cruz’s future could be in jeopardy after he discovers his family had a mysterious past with the organization. And the biggest question? Who is out to get him… and why? Embedded throughout the novels are puzzles and codes for the reader to solve. Since this series is an imprint from National Geographic, there is also section at the end of each book that profiles scientists from all over the world and does a compare and contrast with the science fiction in the book and the real science.

The View From Saturday by E. L. Konigsburg
This is the first book I remember reading as a child and thinking “This is a really well written book.” I think my girls were a BIT too young for this one – it’d have been better to wait another year or two because it was hard for them to keep track of the four main characters and how their families and stories intertwined. For my part, I definitely enjoyed reading it again.

York by Laura Ruby
3 book series
Twins Theo and Tess, and their friend Jamie explore an alternate version of New York trying to solve the greatest mystery of the modern world: the famous Morningstarr cipher. This puzzle and treasure hunt is laid into the streets and buildings of New York City and people have been trying to solve it for over a century.

Encyclopedia Brown by Donald J. Sobol
26 book series
I read and re-read these books as a child and loved trying to figure out the mysteries before flipping to the back to check out the answer. Also, I just really want an encyclopedic memory.

The Gollywhopper Games by Jody Feldman
3 book series
Twelve-year-old Gil Goodson competes against thousands of other children at extraordinary puzzles, stunts, and more in hopes of a fresh start for his family, which has been shamed since his father was falsely accused of embezzling from Golly Toy and Game Company.

The Puzzling World of Winston Breen by Eric Berlin
3 book series
Puzzle-crazy, twelve-year-old Winston and his younger sister Katie find themselves involved in a dangerous mystery involving a hidden ring. Puzzles for the reader to solve are included throughout the text.

The Name of This Book is a Secret by Pseudonymous Bosch
6 book series
A thrilling and suspenseful series with a hilarious narrator where two eleven-year-old misfits try to solve the mystery of a dead magician. Along the way they try and stop the evil Dr. L and Ms. Mauvais, who are searching for the secret of immortality.

39 Clue series by Rick Riordan & Various Authors
11 book series
Grace Cahill, the last matriarch of the world’s most powerful family, is on her deathbed and makes a quick decision to change her will. Those inheriting anything have to choose between taking a clue or one million dollars. The 39 clues are hidden around the world to reveal the family’s secret to their source of power. Can Dan and Amy put all of the clues together or will they abandon the mission completely to discover what happened to their parents? This series has each book written by a different popular author.

Pierre the Maze Detective by Hiro Kamigaki
5 book series
This is such a fun book, very similar to Where’s Waldo?, but also follows a storyline. Help Pierre and his friend find their way through the mazes. Each page is full of beautifully illustrated intricate mazes full of clues to find, and extra mysteries to solve along the way. A page of answers is included at the end of the book. These books will be a hit for puzzlers of all ages.

The Pearls of Lutra by Brian Jacques
22 book series
The Redwall series was one of my very favorite series as a child – I’m pretty sure I read a couple of the books at least five or six times. Tansy, a young hedgehog living at Redwall Abbey, attempts to solve the riddle of the missing pearls while at the same time the evil marten, Mad Eyes, desires them for himself.

Previous Post: « What I’m Planning On Reading Aloud to My Girls This Year
Next Post: A Review of the New Kids Kindle »