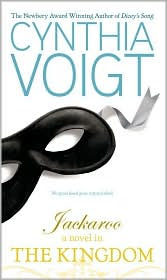 8 of 10: Jackaroo by Cynthia Voigt was a bit of a slow read, but I should have expected that, knowing what I do about Cynthia Voigt, and the character development was superb. You couldn’t ask for a better heroine. A very satisfying read.

I was a late boarder on the Cynthia Voigt train. I’d meant for years to read Dicey’s Song (because it was a Newbery winner), but I knew it was the sequel to a book, and I felt like I should probably read that one first.

Finally, in the fall of 2008, my library was closing for a month due to renovations, so I needed some books on CD to get me through that whole time and I buckled down and checked out both Homecoming and Dicey’s Song. And I loved them both.

However, both of those books are really about character development, rather than a fast-paced plot, and I should have remembered that when I read Jackaroo, suggested by Alison K. Because I was expecting high-adventure and swash buckling swords, and that’s not exactly what I got.

Jackaroo by Cynthia Voigt is set in medieval . . .some country, similar to England, following Gwyn. She’s sixteen and the daughter of a somewhat prosperous innkeeper, although most of the country is experiencing extremely difficult times, with food scarcities and the general civil unrest that often accompanies hunger.

Gwyn is smart and independent, which is frustrating for her in a climate where women have very few rights. She’s very capable of running the inn, but of course it will all pass to her younger (spoiled) brother when her dad names an heir. She doesn’t fancy the idea of marrying one of the fluffy-headed boys that inhabit the town, and she doesn’t really like the idea of being a spinster either, although, frankly, it seems like the best of a bunch of bad options to her.

Jackaroo is a local legend, sort of a Robin Hood, helping the poor, etc, and when a highway robber is caught and held during the winter in order to be paraded through the towns before being hanged, whispers of him possibly being Jackaroo begin to circulate, although Gwyn doesn’t think she believes he really exists.

As the winter drags on, a duke and his young son come to the inn, asking for help as the duke makes a map of part of the kingdom. Gwyn and the servant, Burl, are volunteered to help. Gwyn has a commoner’s healthy dislike of royalty, but she’s compliant enough, until a snow storm endangers them all. With only two horses, Burl and the Duke ride together, while Gwyn and the son take the other, soon getting separated. Gwyn and her charge stumble on a hut, not far from her father’s inn, but the snow is so bad that they are trapped there for several weeks. In that time, she learns more about the kingdom and, even against the law, learns to read, thanks to the boy’s tutoring.

I have to say, I totally did not see the second half of the book coming, mainly because I am not very smart, but I choose to blame it on the fact that I was reading it on the airplane the day of daylight savings time AND jet lag of two hours, plus two very short nights of sleep.

Either way, I really enjoyed Jackroo, and my love for it grows the more I think about it. And I’m definitely remembering that I need to read more by Cynthia Voigt.

if you liked this review of jackaroo by cynthia voigt, you might also like these other posts: