I came back to our hotel last night with 21 books, and I thought, “How can today possibly be better?” (This is 20 books because I forgot to lay out “Tales from Outer Suburbia” by Shaun Tan which I’m WAY excited about). 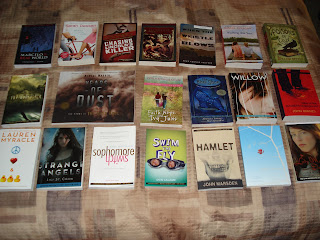 But today was even better.

I went to some excellent panels with my supervising librarian, and then the Lone Star list author panel which included Gary D. Schmidt and Scott Westerfeld, two authors I really really admire. Gary Schmidt was exactly what you’d expect him to be – kind of quiet, but also quick-witted. He writes his books in a tiny little outbuilding on his Michigan farm, heated only by a wood stove. He said during the winter that is extremely fun. And he writes on a typewriter. A typewriter!! If you have not read The Wednesday Wars you should run right out and get it. That book is so well-written, you will hardly believe it.

Scott Westerfeld reminded me so much of Paul Bettany. He was very funny and also belongs to a writing group that shares a power strip at a cafe. He said his books were written while plugged into the same outlet that powered the laptop that Frankie Landau-Banks was written on. I am such a total fangirl for Frankie. Anyway, I need to read some more of his books, since I haven’t picked on up since I read the Uglies series in a four day blitz. 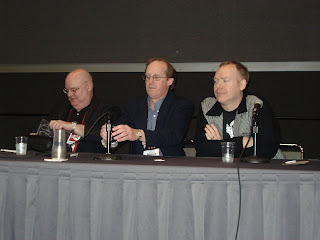 There were a lot of really good panels, but I had about 20 minutes between panels and I decided to run down and hit the exhibit floor again. I was wandering around the Walker publishing booth and there was this really pleasant author sitting there. I asked her what she’d written and she told me that her book was called “Winnie’s War.” It happened to be one of the books I’d picked up the day before and read the inside flap of and mentally noted since it deals with the flu epidemic during WWI which is a topic of particular interest to my father-in-law. I told her so and we chatted for a moment, before one of the publicity people running the booth grabbed a copy of it and said I could have it. The author, Jenny Moss, offered to sign it for me and then we started talking about the conference and the panel we’d both sat in on the morning before.

She said, “Did you meet Melissa Marr?” I had briefly introduced myself to her after the panel the morning before because I was so deeply impressed by how eloquent she was on the panel, but that was it. Jenny motioned her over, introduced me, and then they said, “We’re going over to visit with some other authors. Come with us!”

And so I did, of course. We met John Green (who told me I looked like his high school girlfriend that dumped him) and then we wandered around to the Penguin booth and then sat on the carpet outside the exhibit hall and just chatted until they had to go catch their flights. 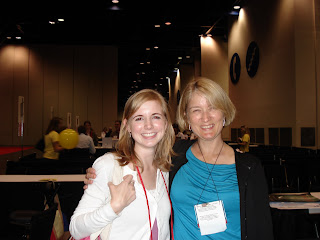 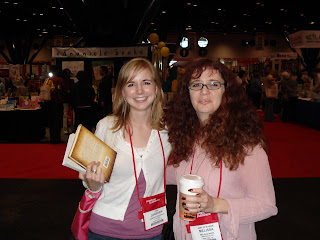 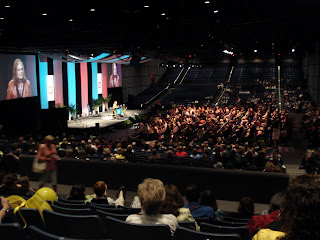 This last picture is of the general assembly meeting where Gloria Steinem spoke. She was terrific. And when I found out she was SEVENTY-FIVE, I almost died. The woman does not look more than fifty-five.

Anyway, Friday, I’m looking at you. You better be even better. Perhaps I will get a librarian job in Boston? I’ll cross my fingers.