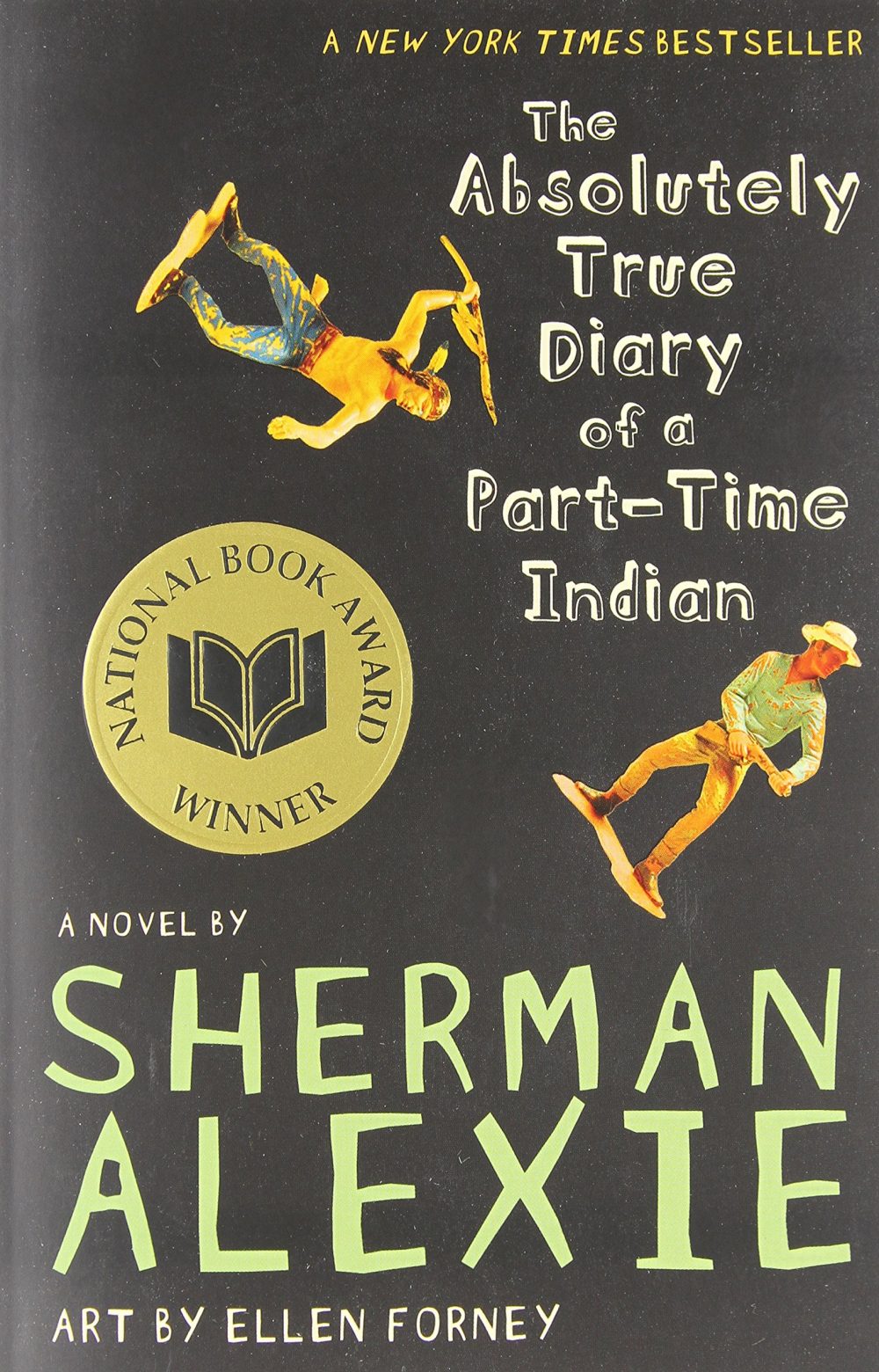 I’ve heard a lot about The Absolutely True Diary of a Part-Time Indian in recent weeks. It won the National Book Award and there was some talk that it might receive a Newbery nod too (it didn’t, which is appropriate since it’s aimed at more mature young adult readers, rather than the age group targeted by the Newbery generally).

The Absolutely True Diary of a Part-Time Indian

The Absolutely True Diary of a Part-Time Indian is written as a first-person narrative by Arnold Spirit (more commonly called “Junior”). He has some serious physical handicaps – he’s a hydrocephalic – and his family is a mess. He lives on the Spokane Indian Reservation where everyone drinks and is absolutely destitute.

When Junior begins high school on the reservation, he opens up his Geometry book to see his mother’s name on the inside cover. He’s furious that they are still using books from twenty years ago and throws the book at the teacher. The teacher, instead of disciplining him, tells Junior that he sees a spark of hope in him that hasn’t yet been quenched by the far-reaching despair of the Reservation and that he needs to get out and quickly.

So Junior goes to the all-white high school outside of the reservation, where, besides the “Redskin” mascot, he’s the only Indian. At first, he’s made fun of, but eventually he earns the respect and friendship of his peers and joins the basketball team.

His best friend, Rowdy, is devastated by Junior’s decision to leave (in his eyes, betray) the reservation and turns against him. When the two teams meet to play basketball, it’s a test of loyalty and friendship. For Junior, there seems to be no way to win, however. He wants his own team to win, but he recognizes that for the members of his team (all rich, college-bound, cell-phone carrying white kids) the game is just part of their lives. For the Reservation team, it’s all they have.

The Absolutely True Diary of a Part-Time Indian is filled with doodles and cartoons, which Junior draws as a way to stay sane and to understand his world and his life. They add a bit of whimsy to the story and illustrate the problems he faces with a dysfunctional family, no foreseeable future, and a world that is biased against him for reasons of race, culture, and disability.

I thought the story line was quite strong, and, although the content was slightly more mature (a lot of death and other sad events), the tone of the story is quite young. I was surprised when I went back to write this review and found that Junior is supposed to be 14 – from the text, I would have guessed more like 11.

The book, despite it’s drown-your-sorrows-in-this-whiskey topics, is surprisingly funny. There were a number of parts where I laughed aloud at Junior’s unexpected wit or the amusing pictures.

Unfortunately, the book was a bit tainted for me by how crass much of it was and because of that, it’s not a book I would feel very comfortable recommending.

If you liked this review of The Absolutely True Diary of a Part-Time Indian, you might also like these books: