Every time I put a new garbage bag in the garbage can, I think, “I should write a post about how Bart and I divide up the housework.” Mainly, because I’m so curious about how other couples and families do it.

I’ve been thinking this for at least three years and am just now getting around to writing about it. For all you know, I might have actually had a fourth and fifth child and just forgotten to mention it.

Bart and I are pretty equally clean. He is CLEANER (e.g. he’s better at wiping off the counters, mopping, or scrubbing the toilets) and I’m NEATER (e.g. I’m the one who is more likely to put things away, organize cupboards and drawers, or file paperwork). I think it’s a fairly good balance, and together we keep the house in reasonably neat shape without spending tons and tons of time cleaning or doing housework.

As far as kitchen duties go, we both try to stay on top of breakfast and lunch dishes and both pretty much take care of our own meals unless it’s the weekend, in which case I’ll usually make breakfast for the whole family and he does all the dishes. This is the same way it goes for dinner, where I cook and he does the dishes (I am grateful to my father-in-law on a daily basis for setting the precedence of the husband doing all the dishes). The girls and I unload the dishwasher in the morning, and Bart helps if he’s around. I also do all the menu planning and grocery shopping.

Bart takes out the garbage (both collecting it to put in the outdoor bins and then taking the bins to the street), and I put a new garbage bag in the kitchen garbage and bring in the bins about half the time, although if I don’t get around to it on garbage/recycle day, he’ll bring them in when he comes home from work.

I do all the laundry, and then we both sort, fold, and put away our own laundry and remake the bed. The girls usually help me sort out their clothes and if it’s earlier in the day, Ella folds hers and puts hers away, and I help Ani do hers too. If they’re in bed, we’ll watch an episode of “Person of Interest” and I’ll fold all their clothes and put them away the next morning.

Frankly, I’m not sure Bart has vacuumed more than a dozen times in the ten years we’ve been married – I like to vacuum and he doesn’t really, so I leave him to do the bathrooms.

Because this house has such an enormous amount of carpet, Bart has said at least fifty times since we moved in, “We need a little robot vacuum.”

So when I saw the new LG HOM-BOT Square Robotic Vacuum, I showed it to Bart and said, “Is this what you’re talking about?” and he was all, “this is EXACTLY what I want.” 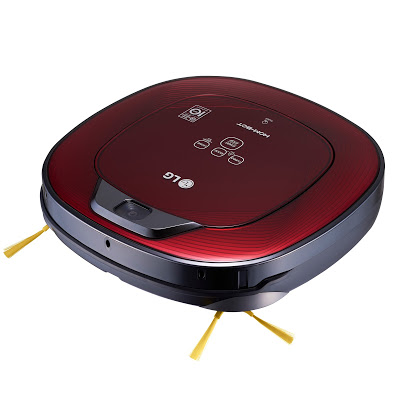 (A vacuum for Father’s Day? Why the heck not? I bought him an iron for Christmas).

It comes in two versions – one is a vacuum only and with one you can insert a large slide-in microfiber mop for picking up residue and stains on hard flooring (which would be the REST of our house which has tile that is a giant nightmare to keep clean).

And it has brushes to pick up dirt and crumbs along the edges of the room too, because even though I actually enjoy vacuuming, I cannot stand when I have to pull out the separate edging tool to pick up everything around the perimeter of the room. Plus it has cameras that can see the room (cool right?) so no spot will be missed. Of course if it’s running and the girls are home, they’d be apt to pick it up and have it vacuum their room but that’s okay since it has Auto-Resume and remembers where it left off. As soon as they’ve moved on, you can have it finish the job it started.

I don’t dream about vacuums, but if I DID, the LG HOM-BOT Square would be it. Especially because it’s short enough at under four inches to zip under beds and couches and chairs (aka the things I never ever vacuum under).

I’d love to hear how you split up household cleaning responsibilities (and click to check out the LG HOM-BOT Square and experience the very weird and grown-up feeling of lusting after a vacuum).

Previous Post: « A Summer Reading Collection with Kern + Flourish
Next Post: Tell Me What to Read: Summer 2016 Edition »