About a week ago, Tally and I flew to Austin to host a story time and family dance party at BookPeople in celebration of Sandra Boynton’s newest song book, HOG WILD! 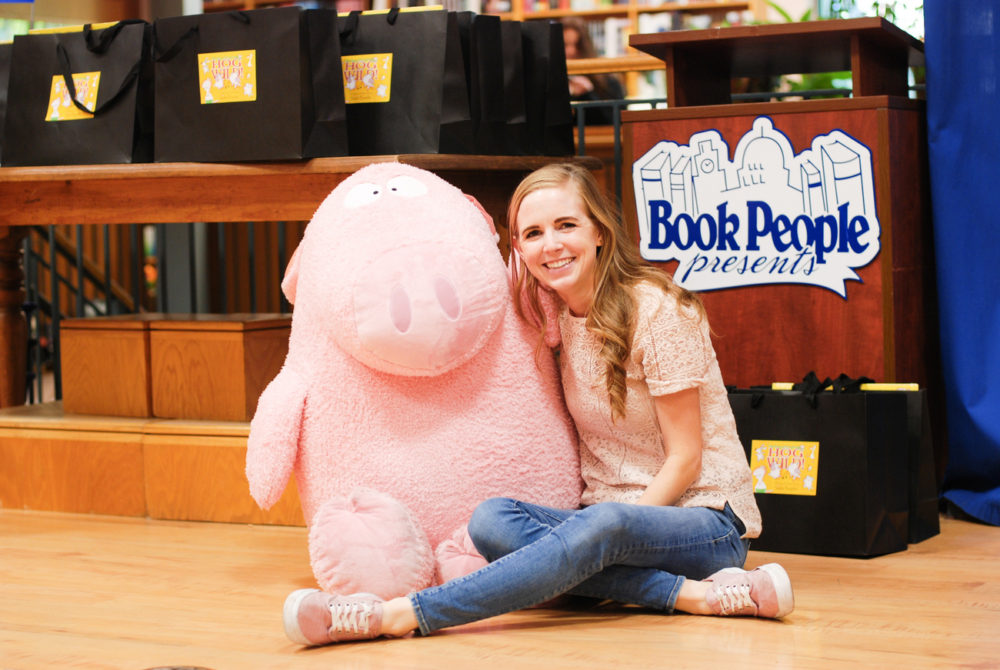 I think it goes without saying that this was one of the highlights of my professional career.

Our family has been fans of Sandra Boynton since Ella was born, and I could recite many of her books backward and forward.

Since HOG WILD! came out a few weeks ago, the girls and I have been listening to the CD in the car on a daily basis (Star refers to the CD as “frustrated” because of the line in the first track, “Dance it Out,” that goes, “If the world is getting me frustrated”) and every song is just so catchy and fun. 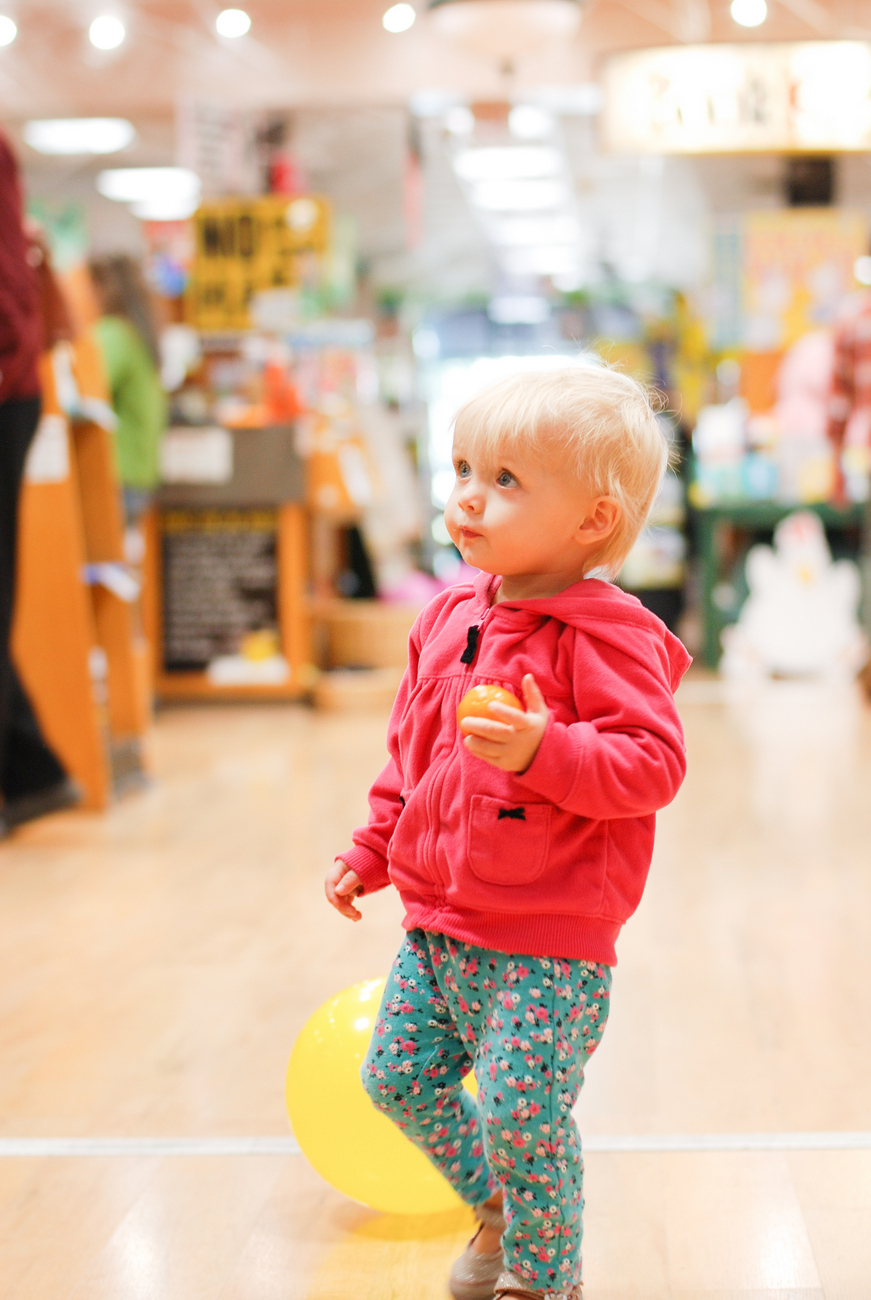 I love that they are in a wide variety of styles, from western swing to Elvis and everything in between. Plus, they’re performed by some seriously impressive people like Kristen Bell, Samuel L. Jackson, Five for Fighting and a bunch of other names you’d recognize.

It’s kind of crazy how much talent Sandra Boynton has.

I’ve hosted quite a few events before, but this was a particularly fun one because it was aimed at children and families, and because it was a come-and-go kind of event, the format was a little different. 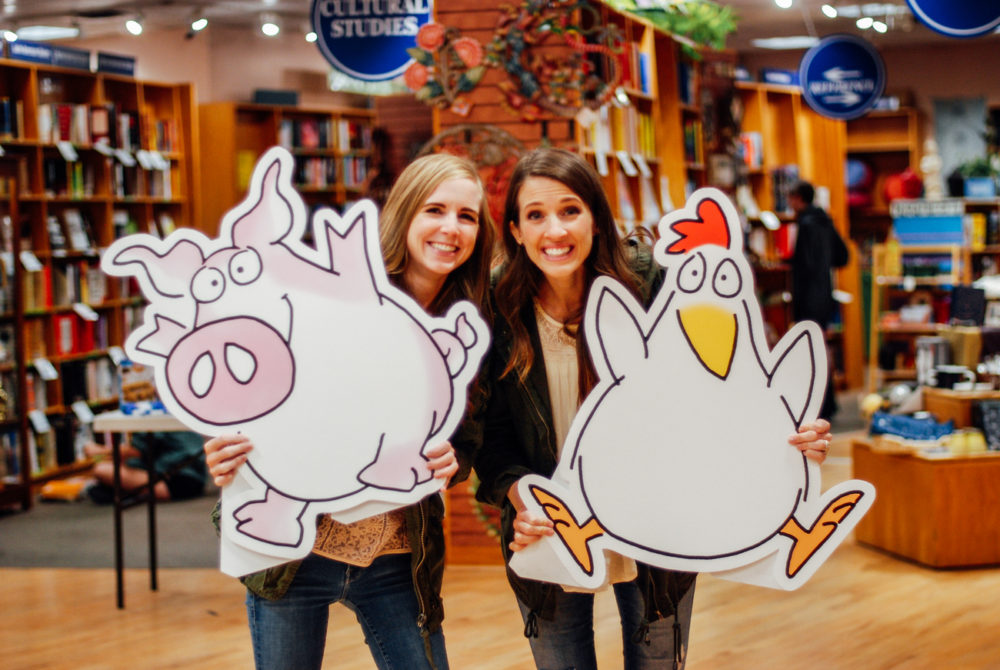 We put together a couple of kid-friendly crafts (huge thanks to Morgan, Ralphie from Simply on Purpose, and Kacie from Mama Case Prints for manning the craft stations) of varying degrees of difficulty.

The first one was a T-Rex Puppet to go along with the Tyrannosaurus Funk song. I made a print-out with the parts of the face that could be colored and cut out and glued onto a paper bag (if you’d like to make your own, you can download and print it out here and glue it onto a brown paper bag).

The second one was a pig (or hog!) paper plate mask (you can download the printable sheet for that here – just cut a paper plate in half, glue on the nose and ears, cut out eye holes and tie an elastic cord around the sides to keep it on your child’s face) and it was so cute to see a bunch of little pigs running around the children’s department of BookPeople. 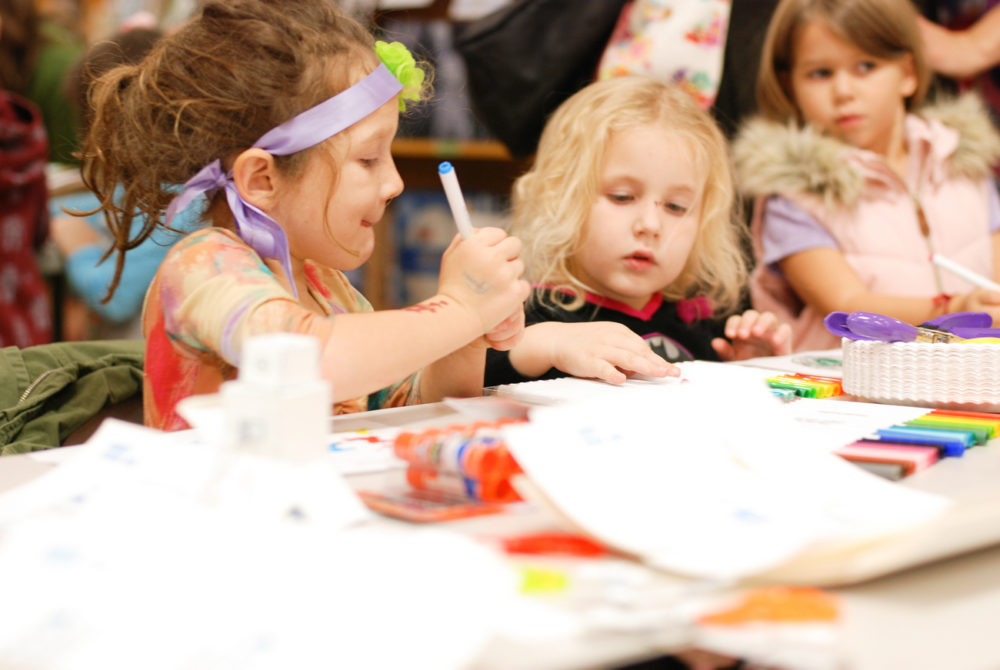 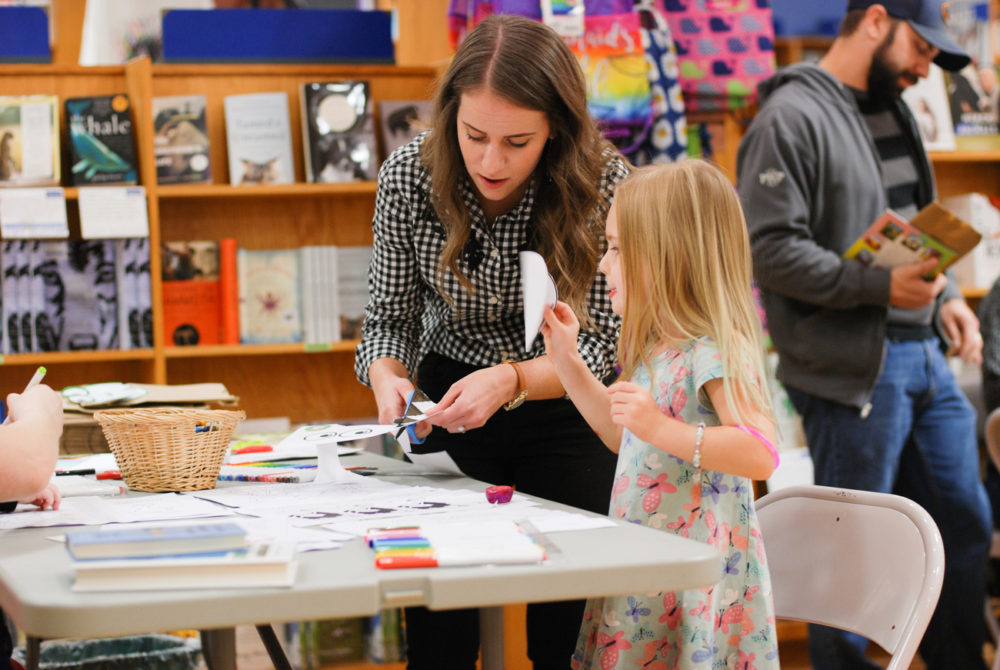 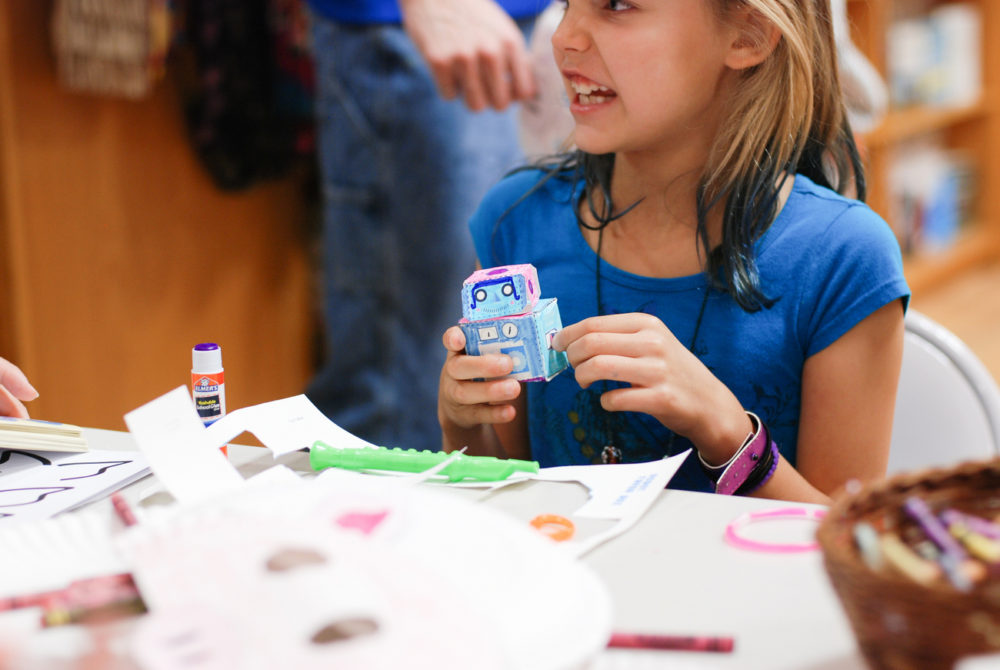 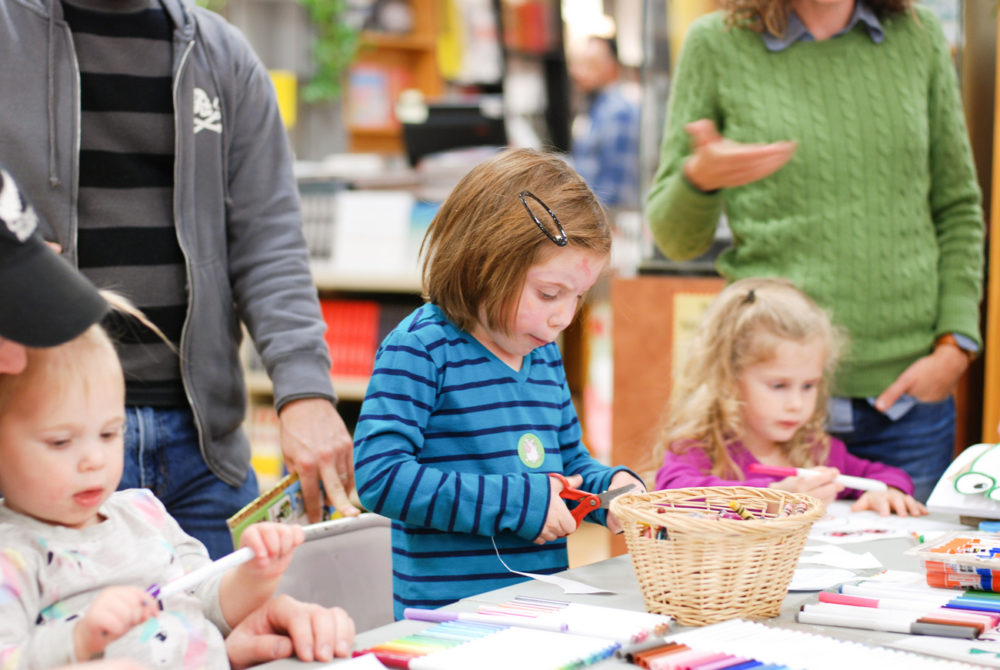 And the last one was a little 3D robot with an empty stomach that could be used to hold coins or candy or other treasures.

We also had snacks because if there’s one thing I know about hogs, it’s that they like snacks. 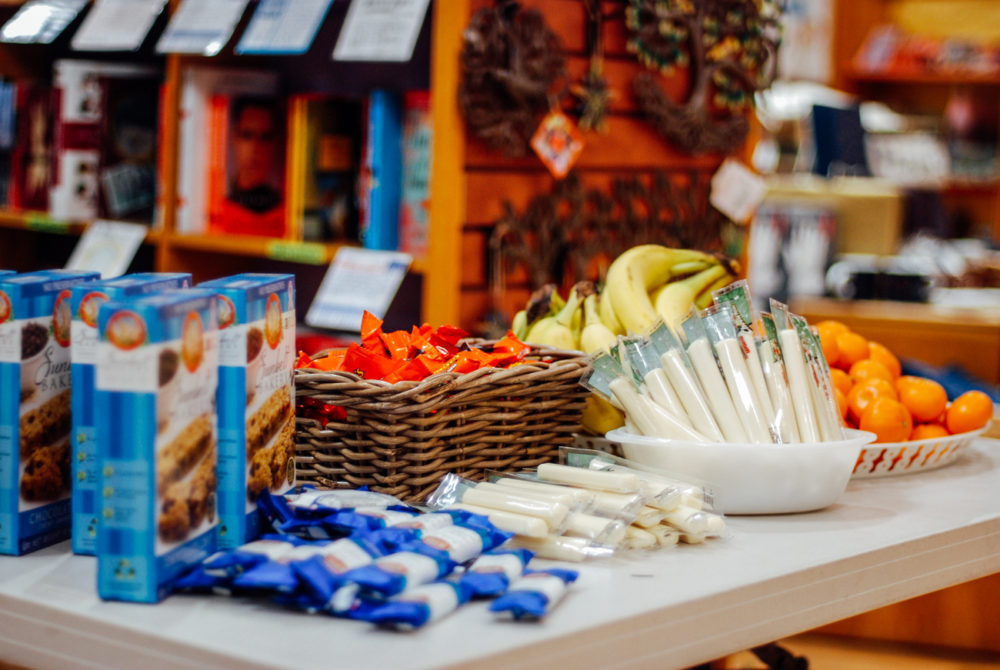 We started things off with story time and I’d forgotten how much I love reading to a larger group of children than just my three kids. There is a whole photo series of me making really unflattering faces while I mooooo and baaaaa and la-la-la. 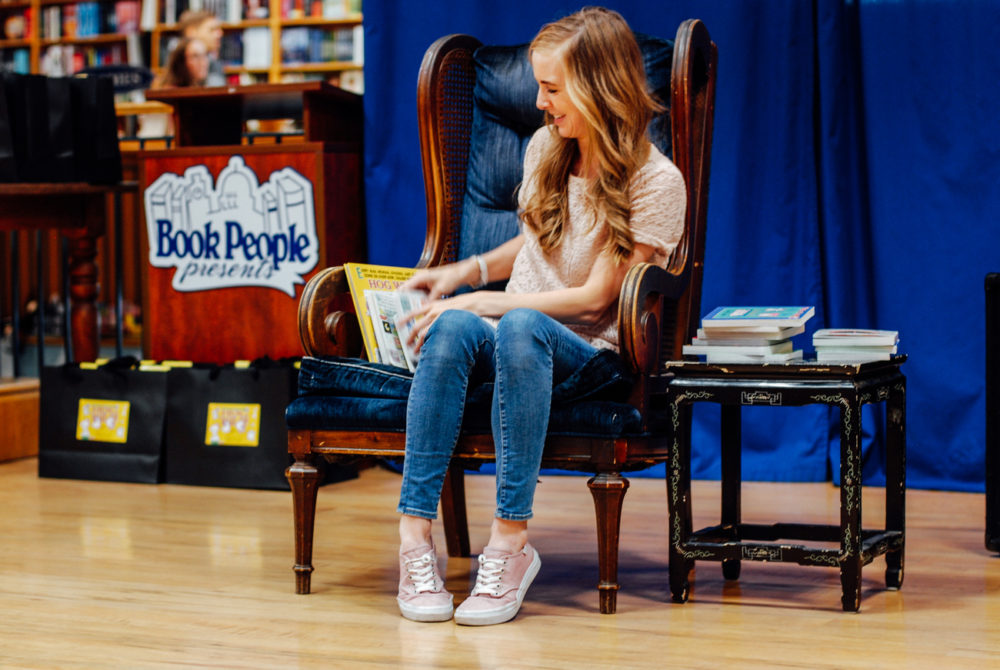 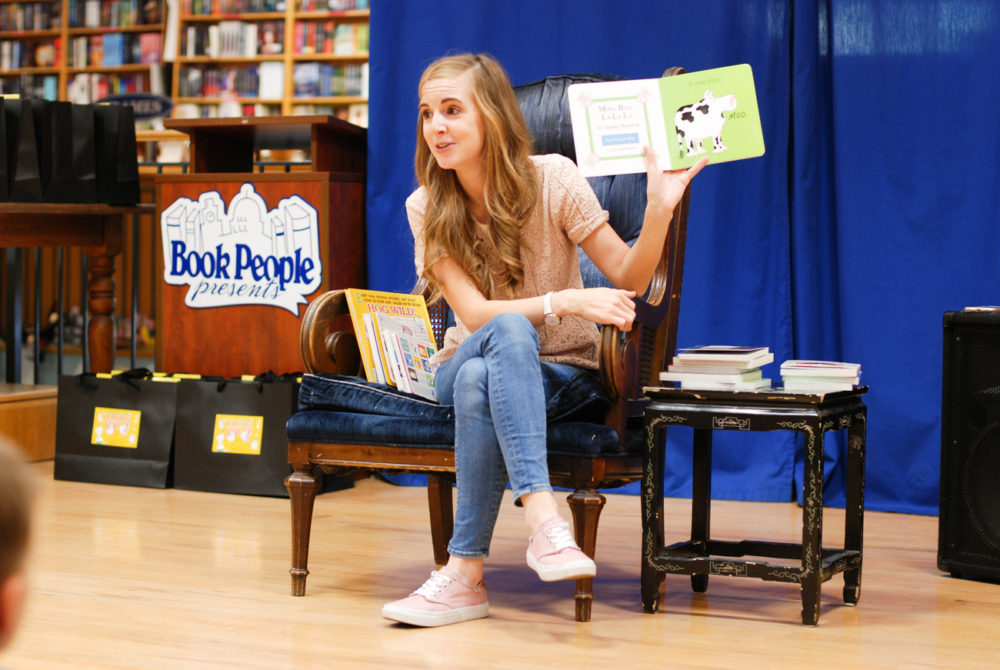 After about six stories, we let the kids loose on the crafts, and then about every 15 minutes, as new families arrived, I’d do a mini story time with 2-3 books.

Then, of course, there was dancing. We cranked up the HOG WILD! music and I passed out glow bracelets, tossed balloons onto the dance floor, and started blowing bubbles. 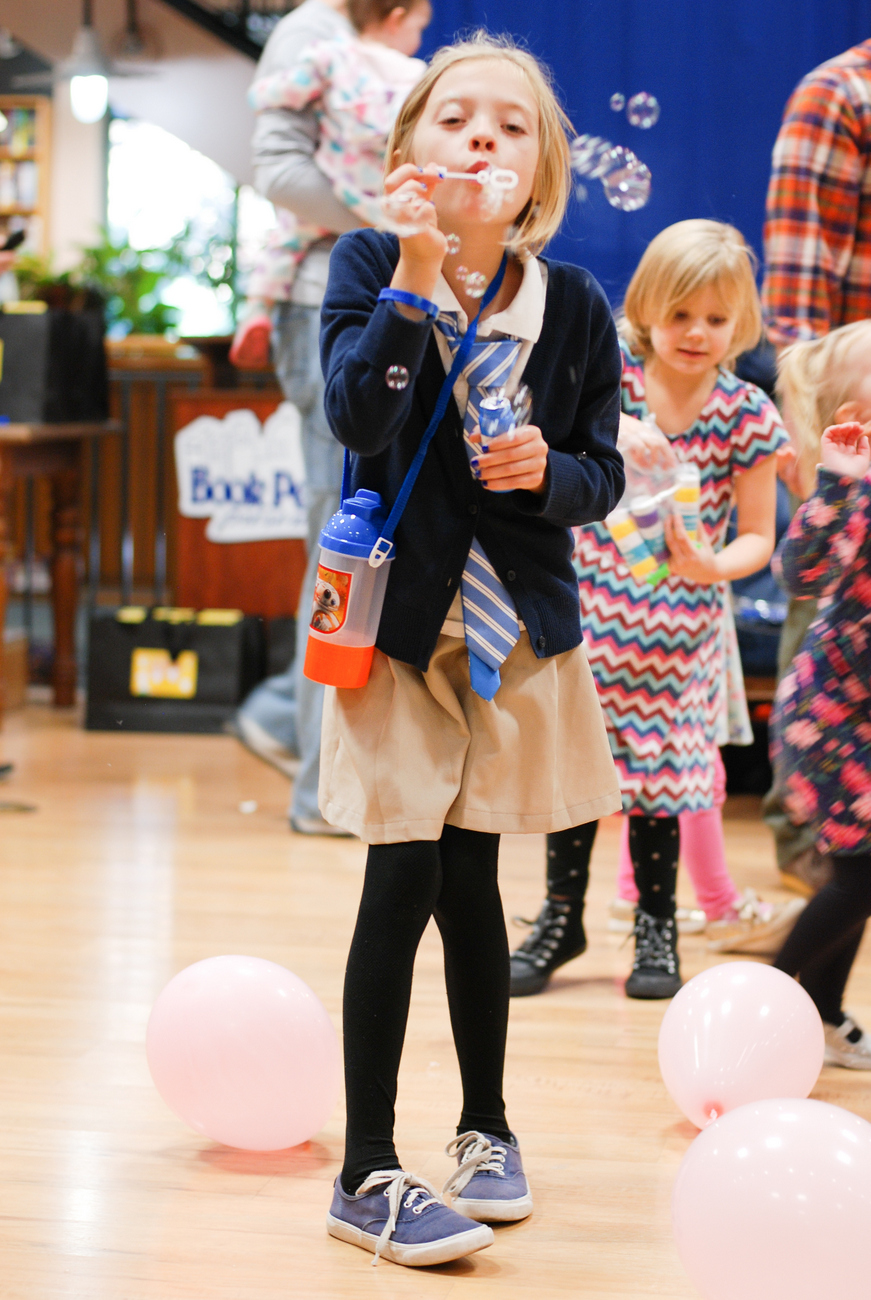 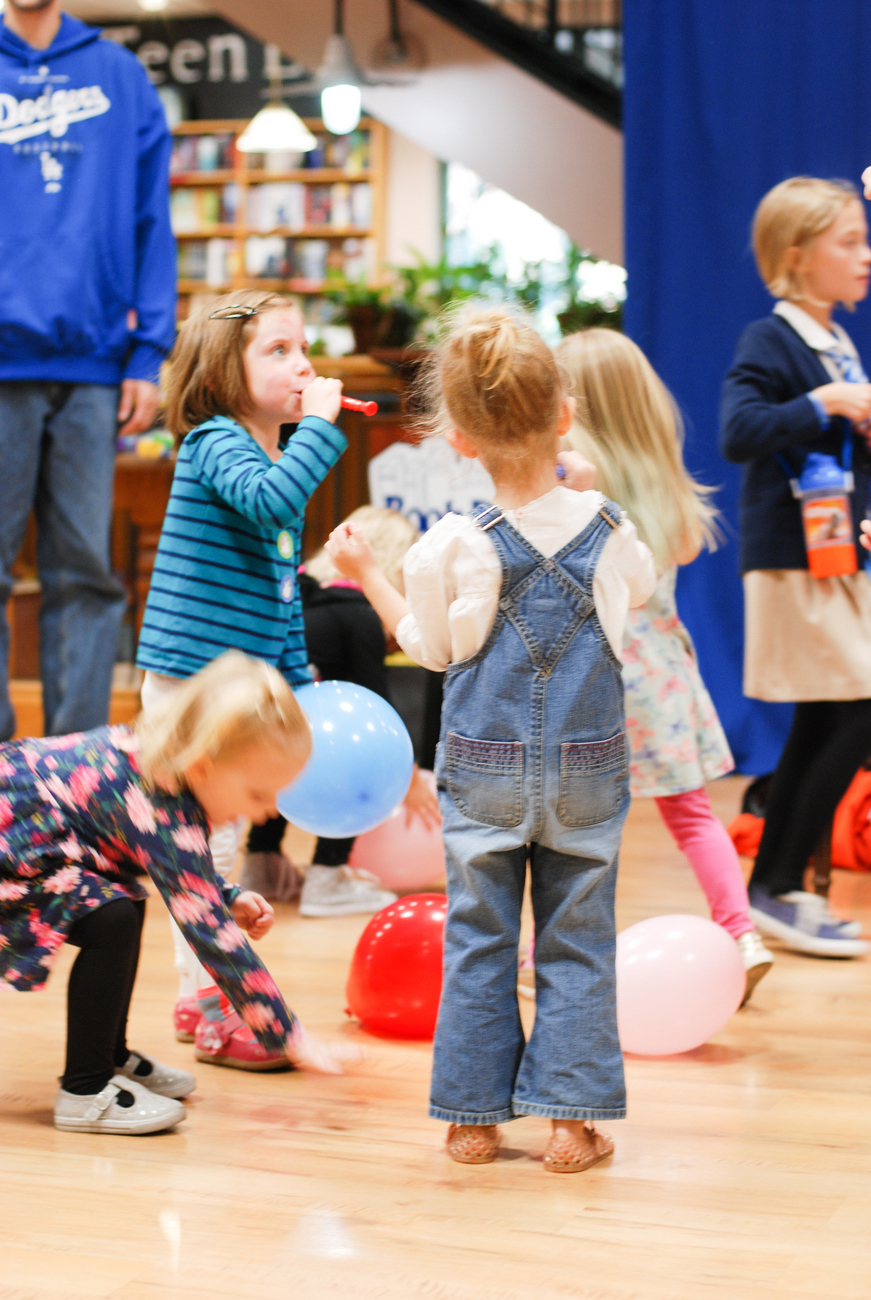 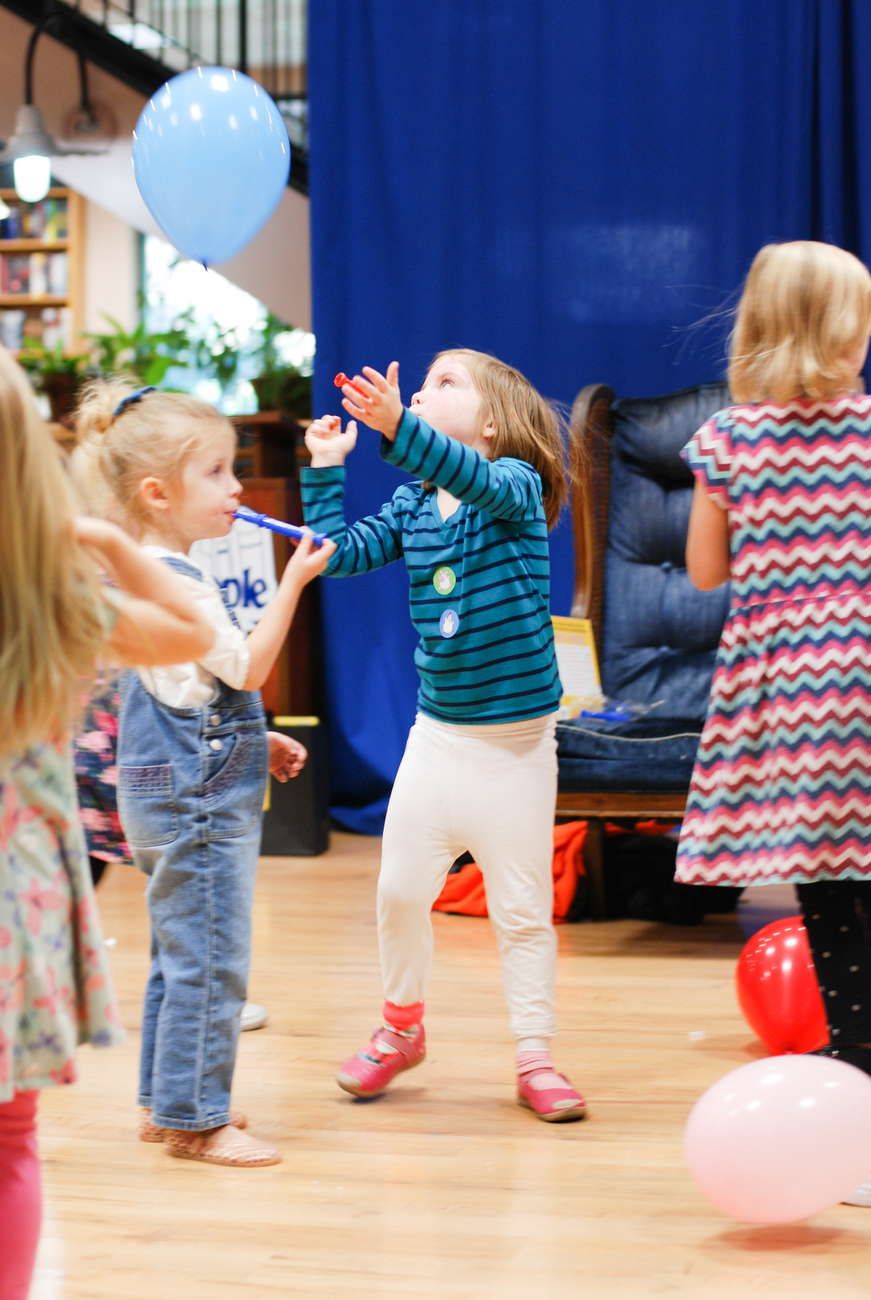 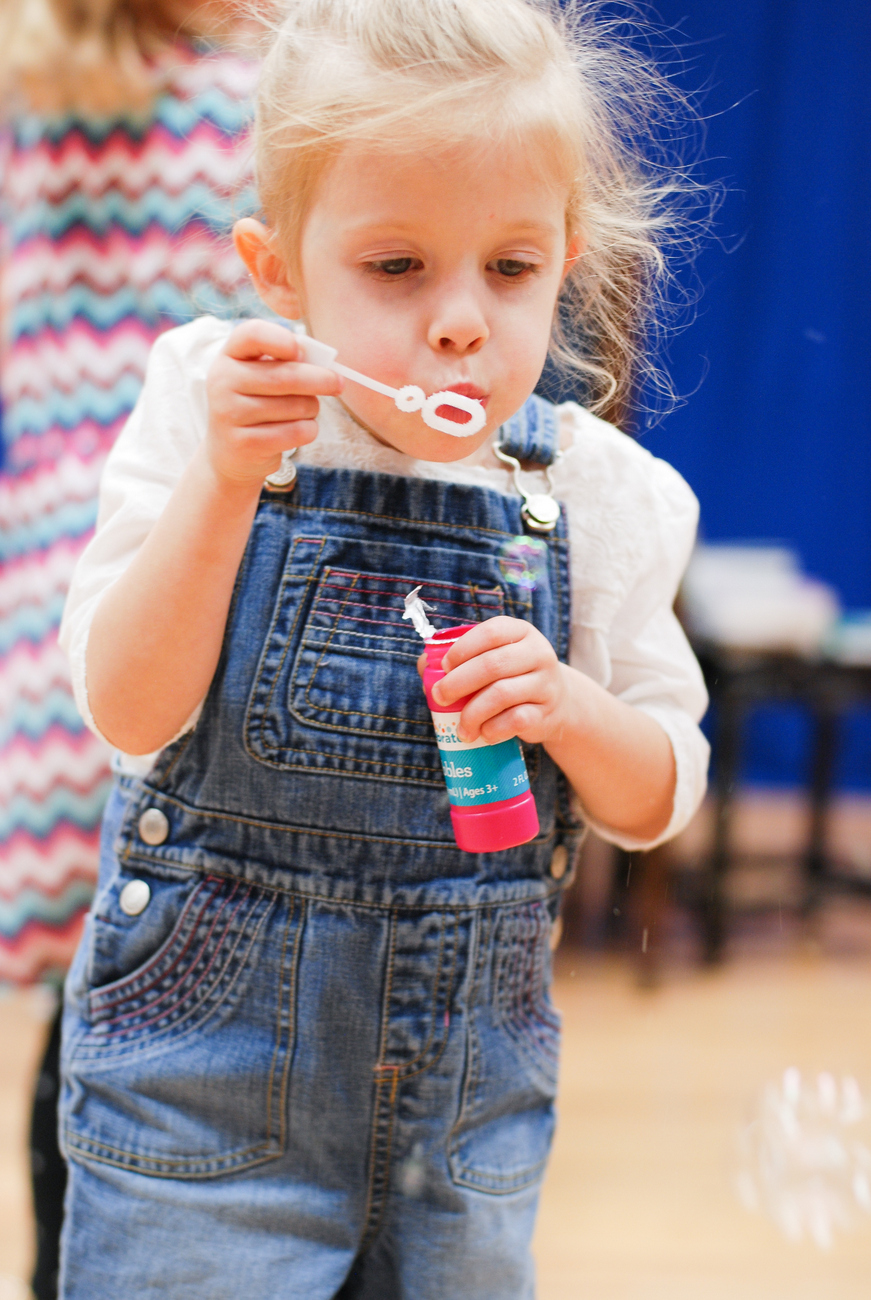 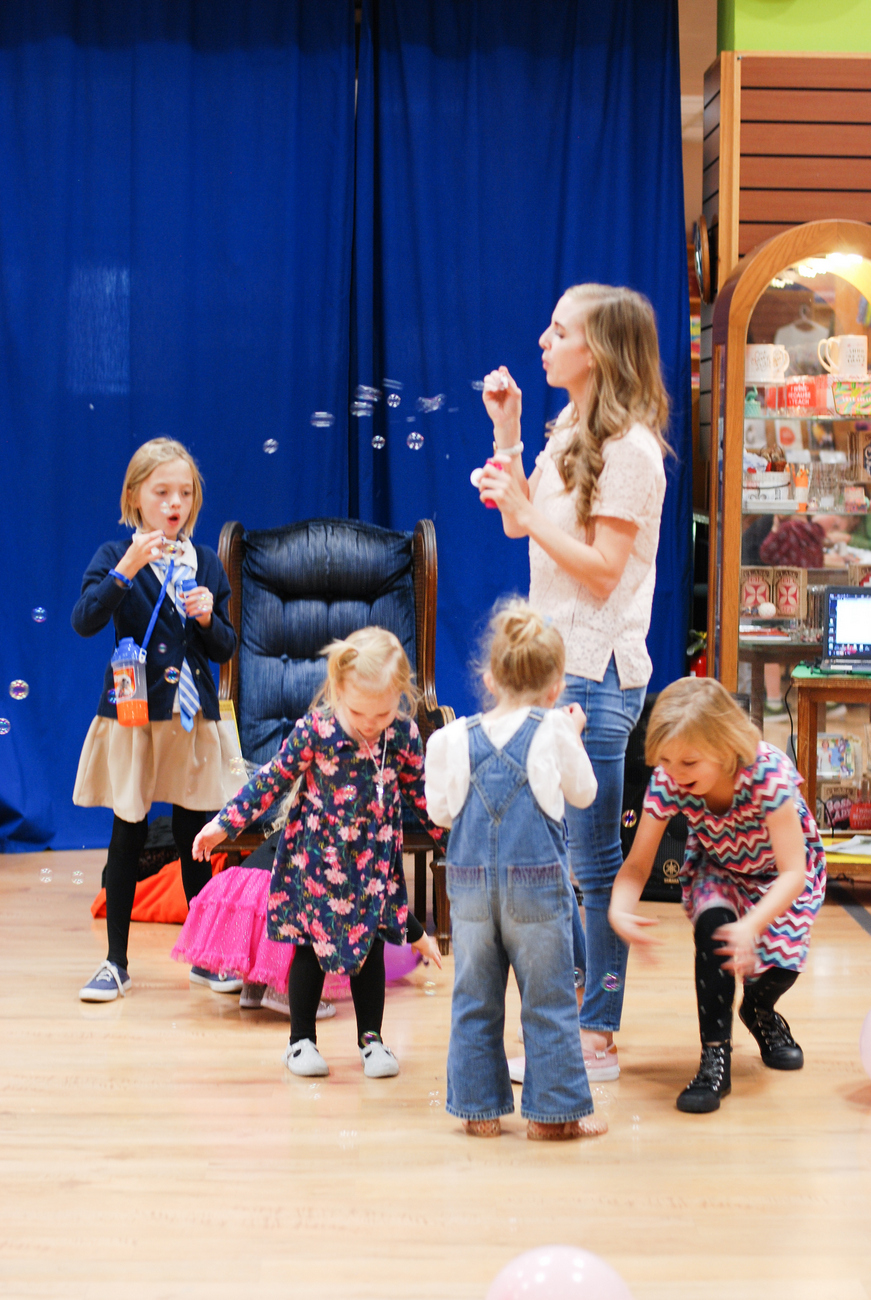 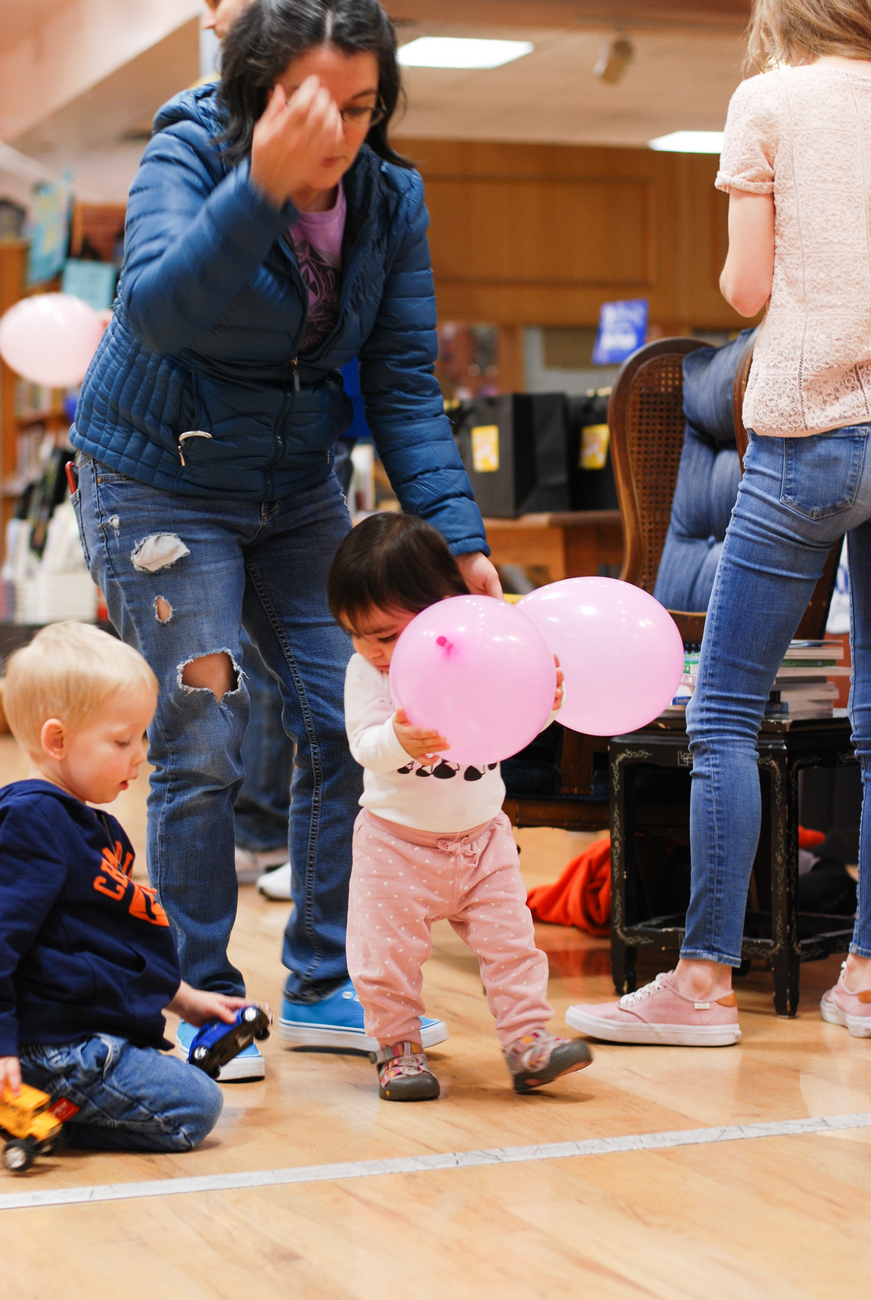 All the kids were in heaven, and there were some parents with some serious dance moves too.

Workman Publishing had sent a massive plush pig to BookPeople and everyone who attended could put their name in to win it. 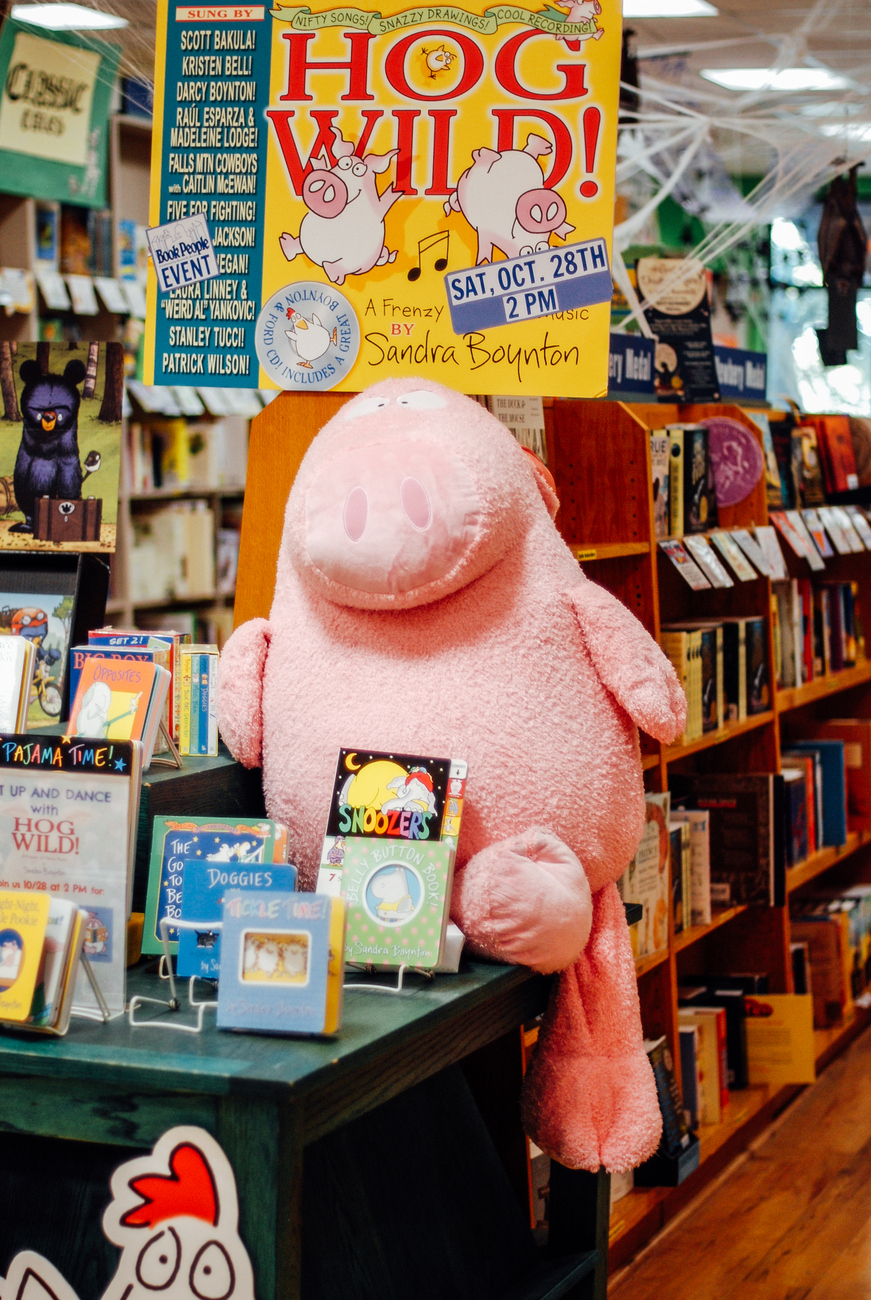 This was surprisingly popular and so many people were hoping they’d get to take it home. At the very end, we drew names for a dozen vinyl copies of HOG WILD! and finally pulled a name for the plush pig winner. 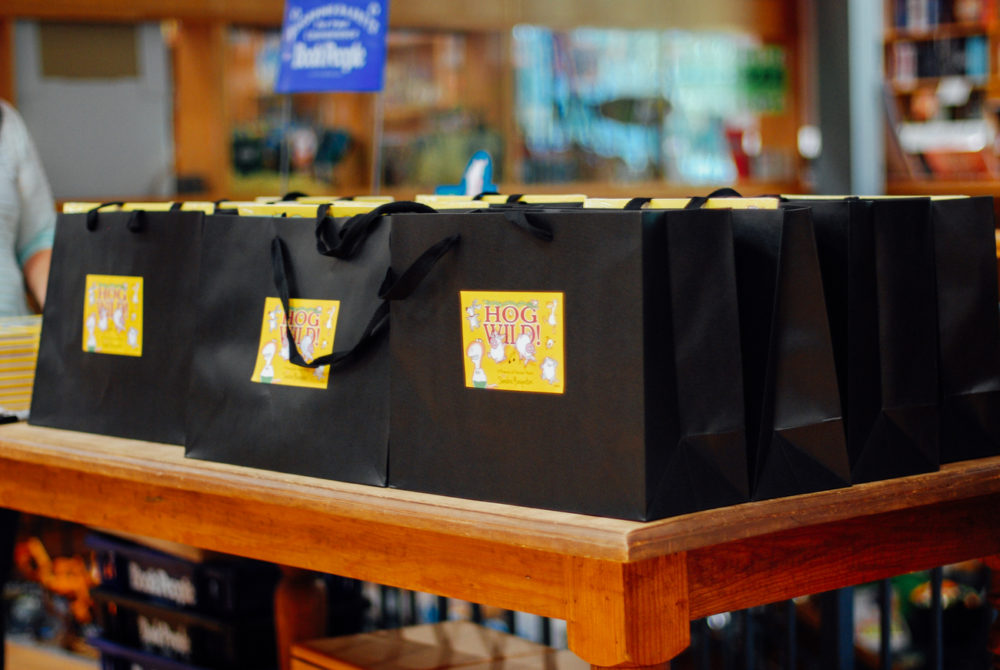 Not everyone who came had stayed the full two hours, so when the name was called, there was silence and it seemed like one of those anti-climatic giveaways where you email or  call the winner after the fact.

But then, a little three-year-old girl came racing to the front from back in the children’s department calling, “I’m here! I’m here!” and it was the perfect ending to send her and her mom home with the giant pig.

It was SUCH a fun afternoon and I had the best time reading, dancing, making crafts, and meeting a bunch of fellow Sandra Boynton lovers.

And if you haven’t snagged a copy of HOG WILD!, I highly highly recommend it – it’s fun for the whole family and makes a perfect gift for the holidays. 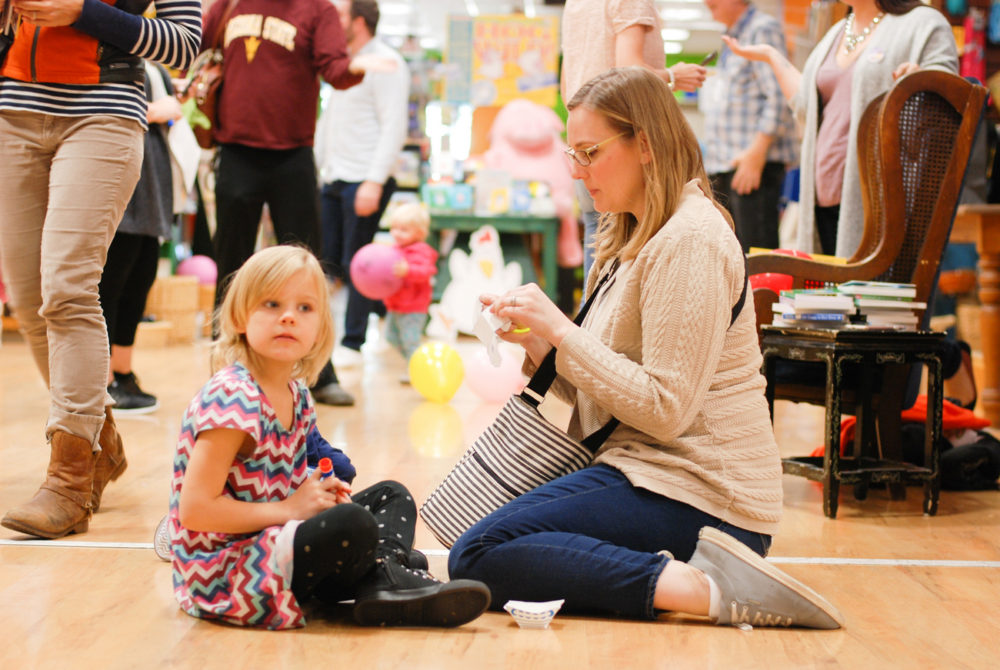 Photos by Simply on Purpose; edited by Christie Knight Photography