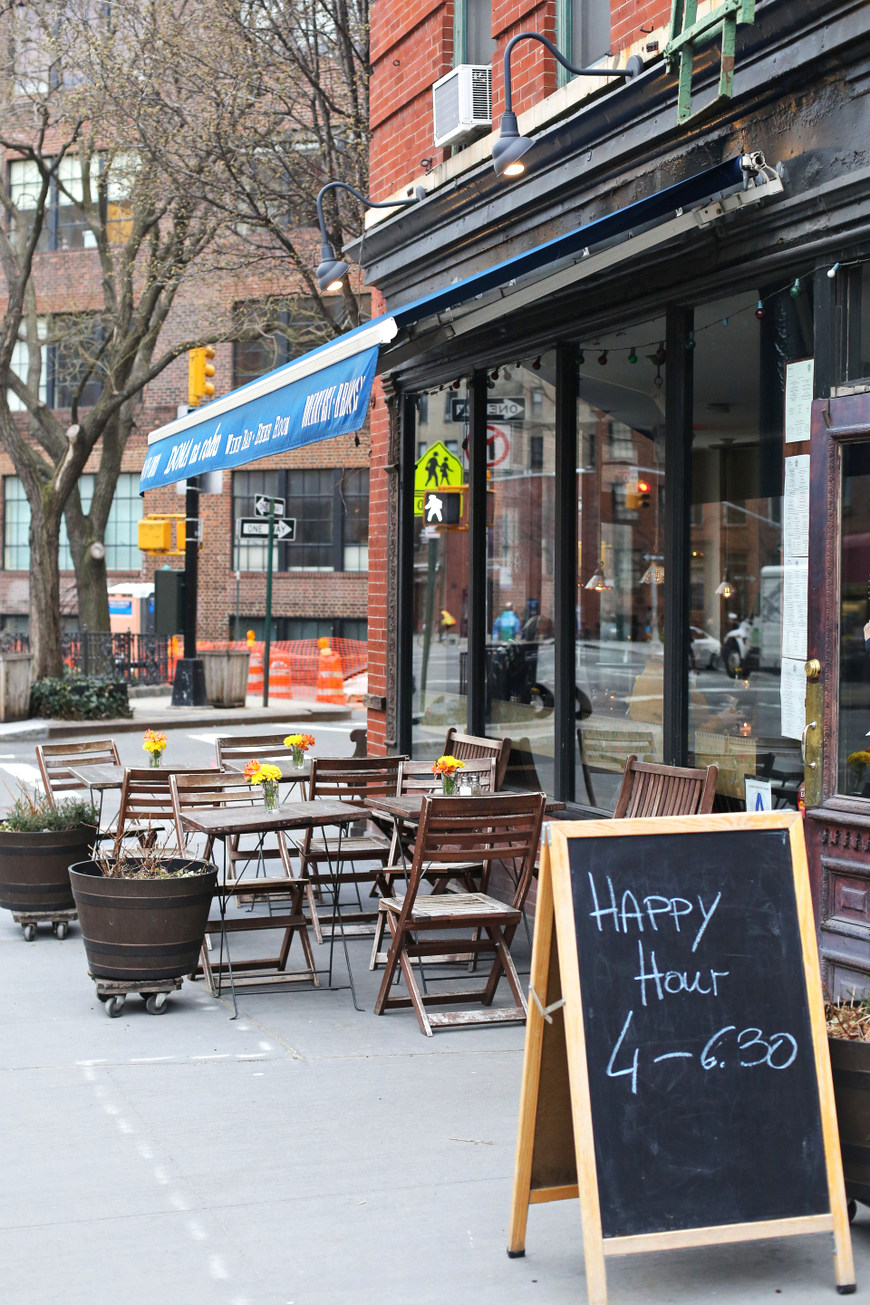 A few weeks ago, Tally and I flew to New York City for a few days with the Pampers Baby Board.

This my third Pampers Baby Board event but the first one I’ve attended that hasn’t been held in Cincinnati at the P&G headquarters.

When I get asked about the Pampers Baby Board, it’s kind of hard to explain. It’s kind of a focus group/mini-conference/press trip mash-up.

It’s a combination of fun (amazing meals, tours of the city, getting your hair done), brand information and sneak peeks (in 2015, we saw early versions of the three-channel diapers before they went to market, and we meet with the brand directors from Pampers who give insight into the brand and the products – I always find this part fascinating), and influencer training (this time, we had a big panel about how Facebook marketing works and also someone from the YouTube office came to speak about how to make great YouTube videos and run a channel).

We also had brainstorming sessions about upcoming campaigns, had a chance to work with professional photographers on some content for our blogs and social media platforms, and saw demonstrations of various new Pampers products.

It’s also a pretty varied group of people. When I was invited to join in 2013 (about three years after it launched), there were around 25 people. By 2015, there were 38, and now the number of members is 50. There are bloggers and YouTubers, parents with one child and some with five or six. Some have babies and others are now way past the diaper stage with teenagers and kids going off to college.

At this point, I know many of them quite well and it’s now a fun chance to catch up with parenting friends from around the country (instead of a pretty intimidating set of impressive strangers like it was the first year). Every year, I feel like I connect with a few different people, whether those are new additions to the board or people I just didn’t happen to spend a lot of time with at past events.

The team that runs the Pampers Baby Board changed completely this past year too, so all of them were new faces.

I highly recommend taking a baby with you (I took Star with me in 2015 when she was about 4 months old) – it makes you very memorable when you’re the only person with a child and everyone will ask to hold your baby, from the Canadian dad of triplets to the mom who runs a family vlog with her husband to every member of the PR team.

I flew out REALLY early on Wednesday morning (my ride to the airport arrived at 3:45 a.m.) and then took a five hour flight to NYC. Tally slept nearly the entire way in my Solly Baby wrap while I read The Names They Gave Us on my Kindle (and maybe took a quick nap myself, feeling really glad that the wrap meant I wasn’t going to drop my baby on the floor). 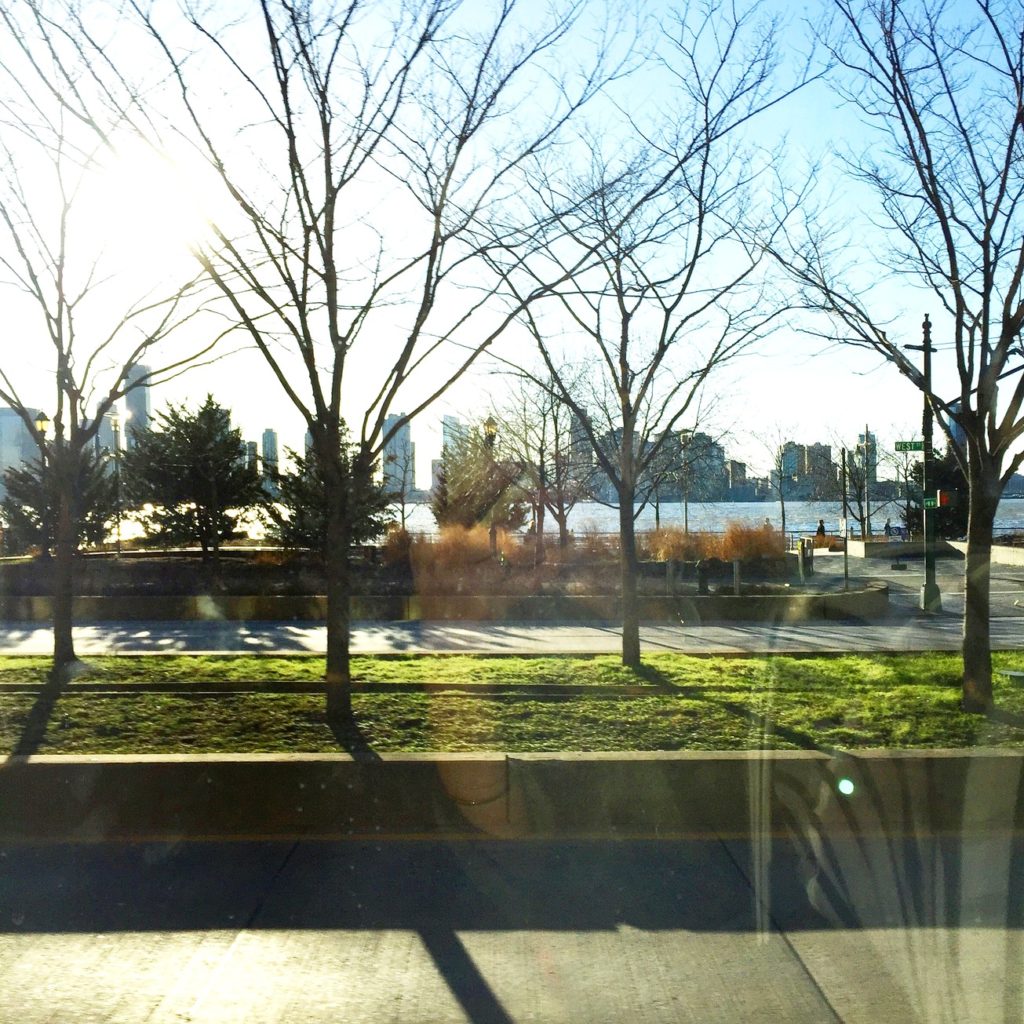 Once I arrived, a car showed up to pick up a couple of us who had arrived at similar times and took us down to the World Trade Center where almost everyone had already arrived and were already well underway into meetings. We grabbed some lunch leftovers (they had a smorgasbord of popular foods, from pizza to hot dogs to cheesecake, from around the city) and settled in.

Once the meetings were finished, we took a charter bus directly to dinner at Greenwich Project – we had the whole upstairs room and the food was excellent, plus they’d set up a big candy bar in Pampers colors. 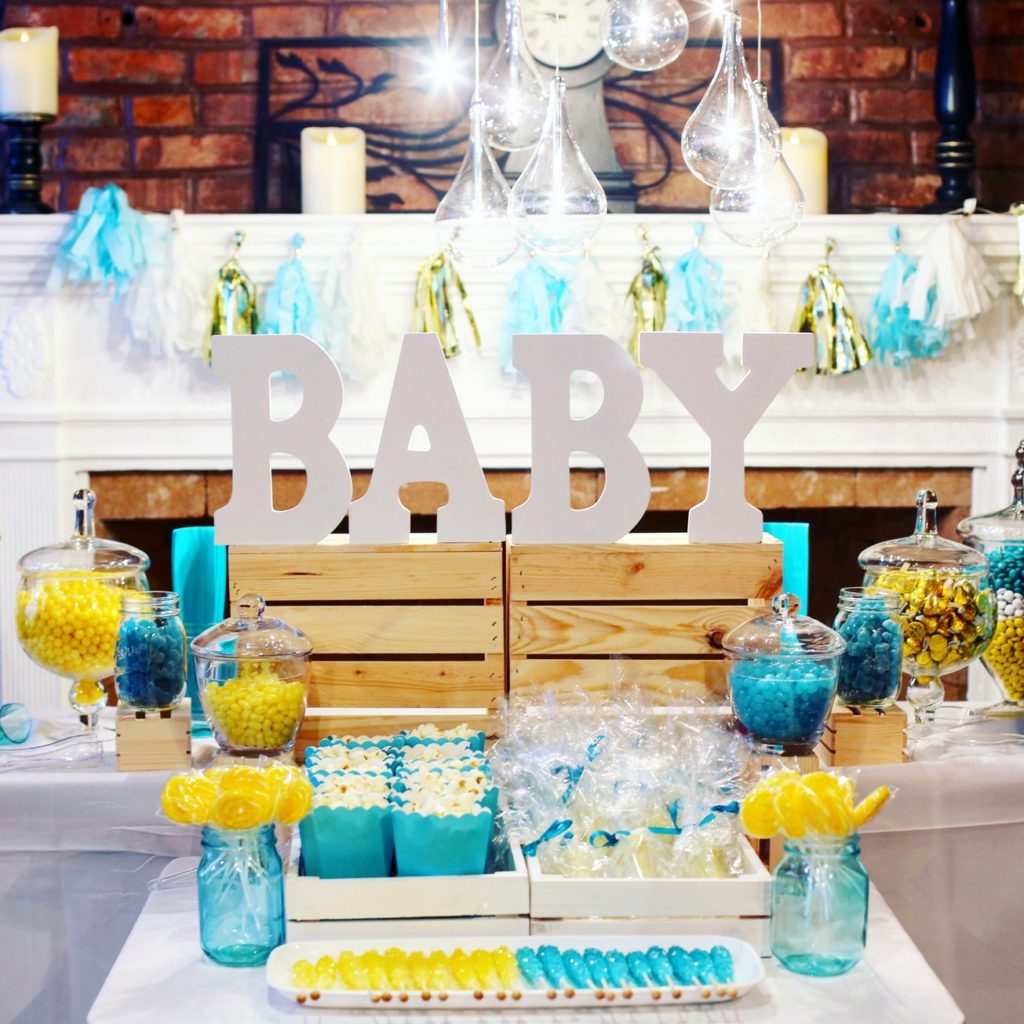 After a fantastic meal, we headed back to the Dream Hotel, which was a totally funky place (the pool is right above the lobby and you can see through the roof right into the pool – which is cool, but wouldn’t make me actually want to swim).

Since we’d been up since the crack of dawn, Tally and I both had no trouble sleeping, despite the fact it was only about 8 p.m. our time. In fact, she slept the best she ever had up until that point, doing a six hour stretch. 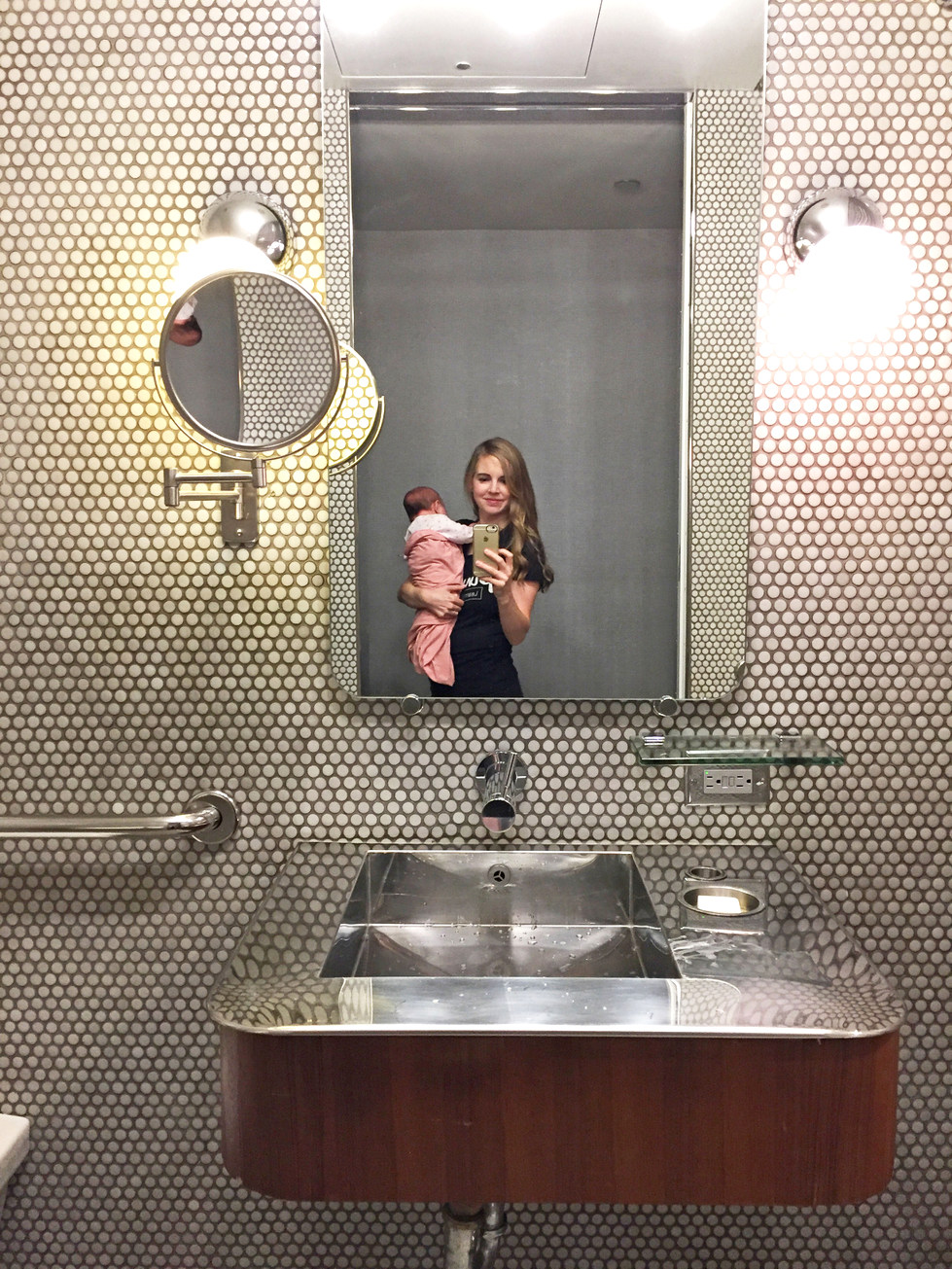 In the morning, we headed around the corner to the Google offices where we spent the day in various meetings, listening to presentations, and working on some hands-on projects.

For dinner, we were headed to the Institute of Culinary Education for a cooking class/dinner (a few people grumbled about this saying, “I make dinner at home every night!” which made me laugh), but we had a couple of hours of free time before then and one of the Baby Board members, Adam, is a life-long New Yorker and offered to do a city tour for anyone one interested. 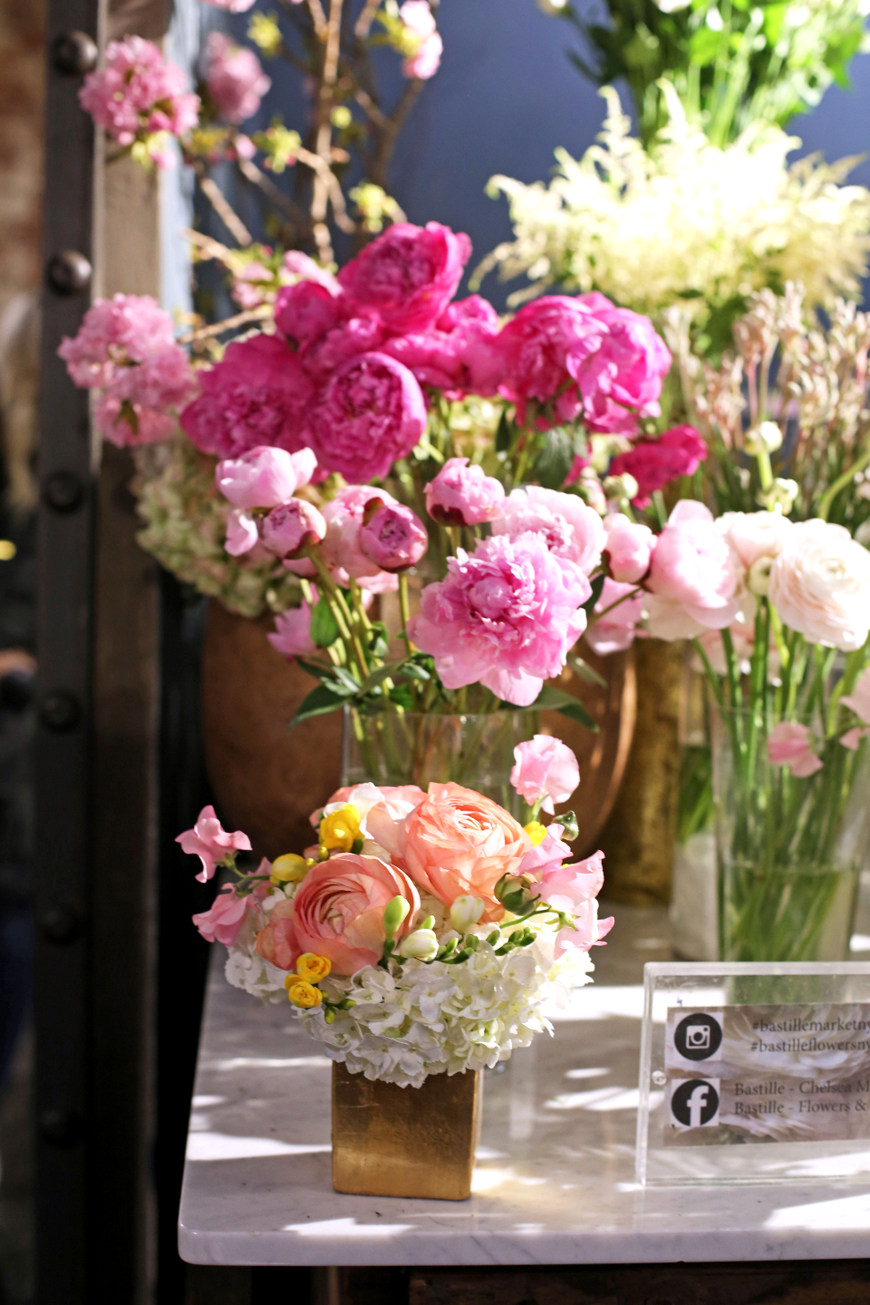 It turned out that Jenica from A Slice of Style and I were the only takers, so the three of us (plus Tally in the stroller) headed out into the chilly weather and wandered through about three miles of New York, starting at the Chelsea Market and then over the Highline and down through Greenwich Village and Tribeca until we arrived at dinner. 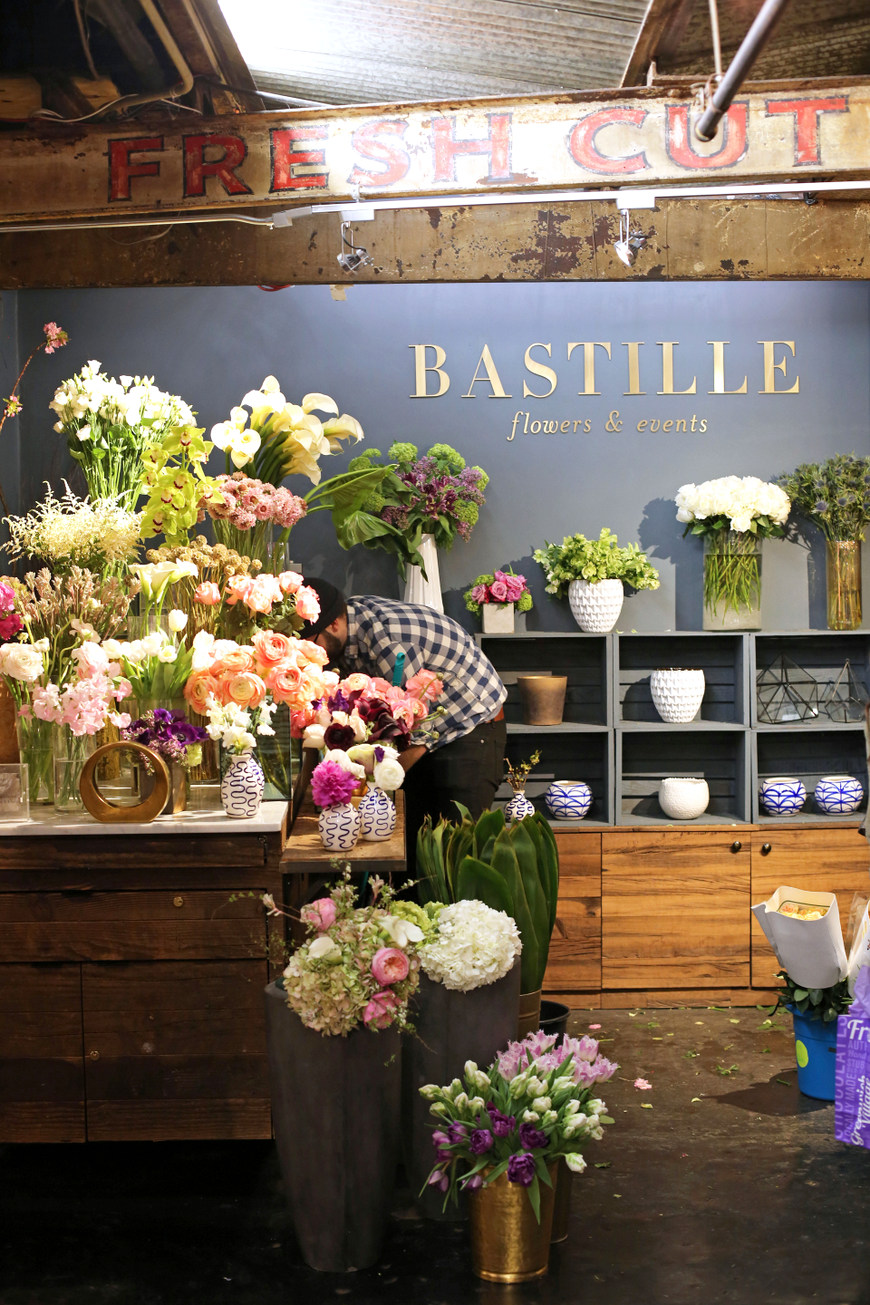 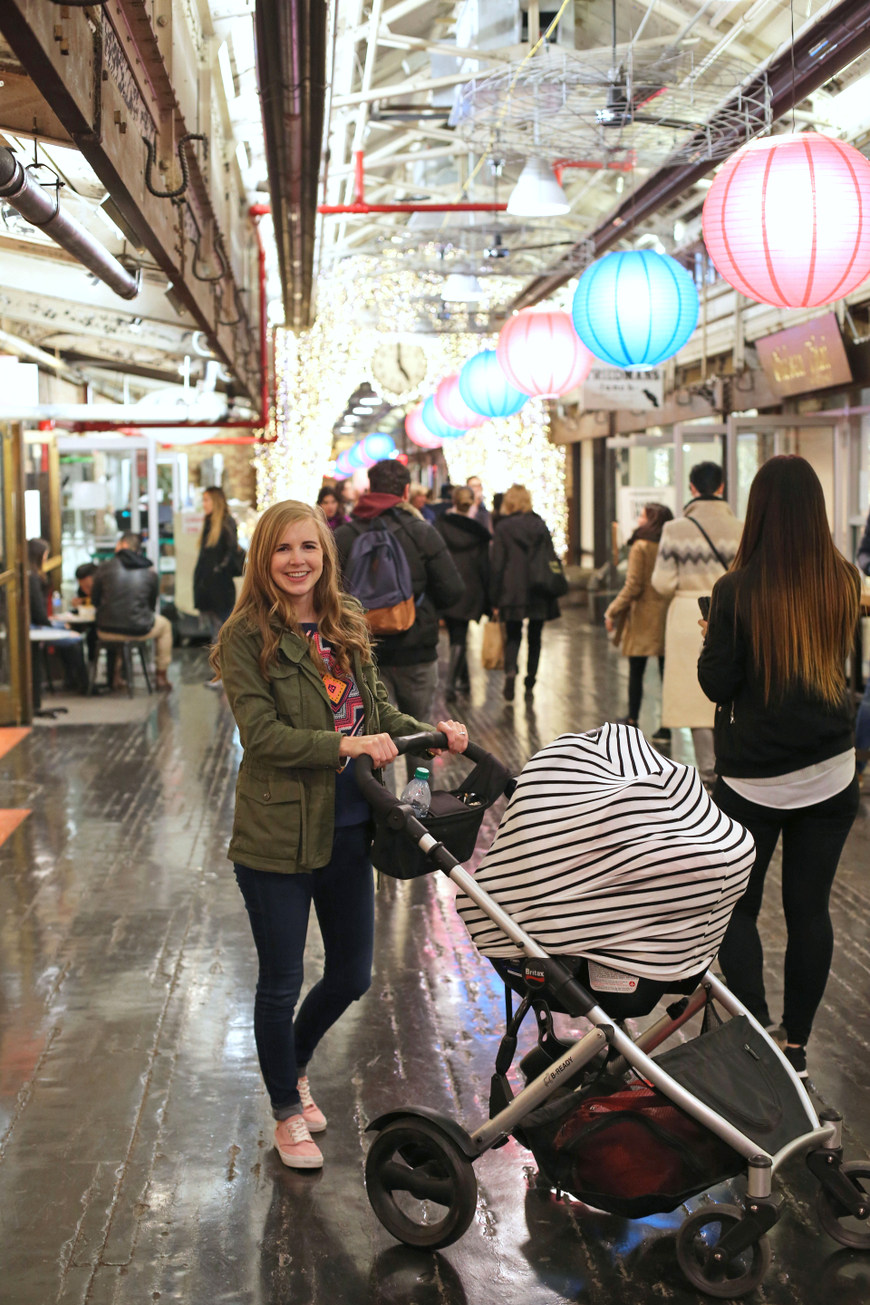 As a suburbs dweller, there’s nothing I love more than a big city and it was so fun wandering through the beautiful streets and seeing so many fun shops and restaurants and apartments. Plus, Tally slept the entire time (that little hat is from June & January and was part of our gift bags when we arrived. It was a lifesaver since I hadn’t expected it to be as cold as it was). 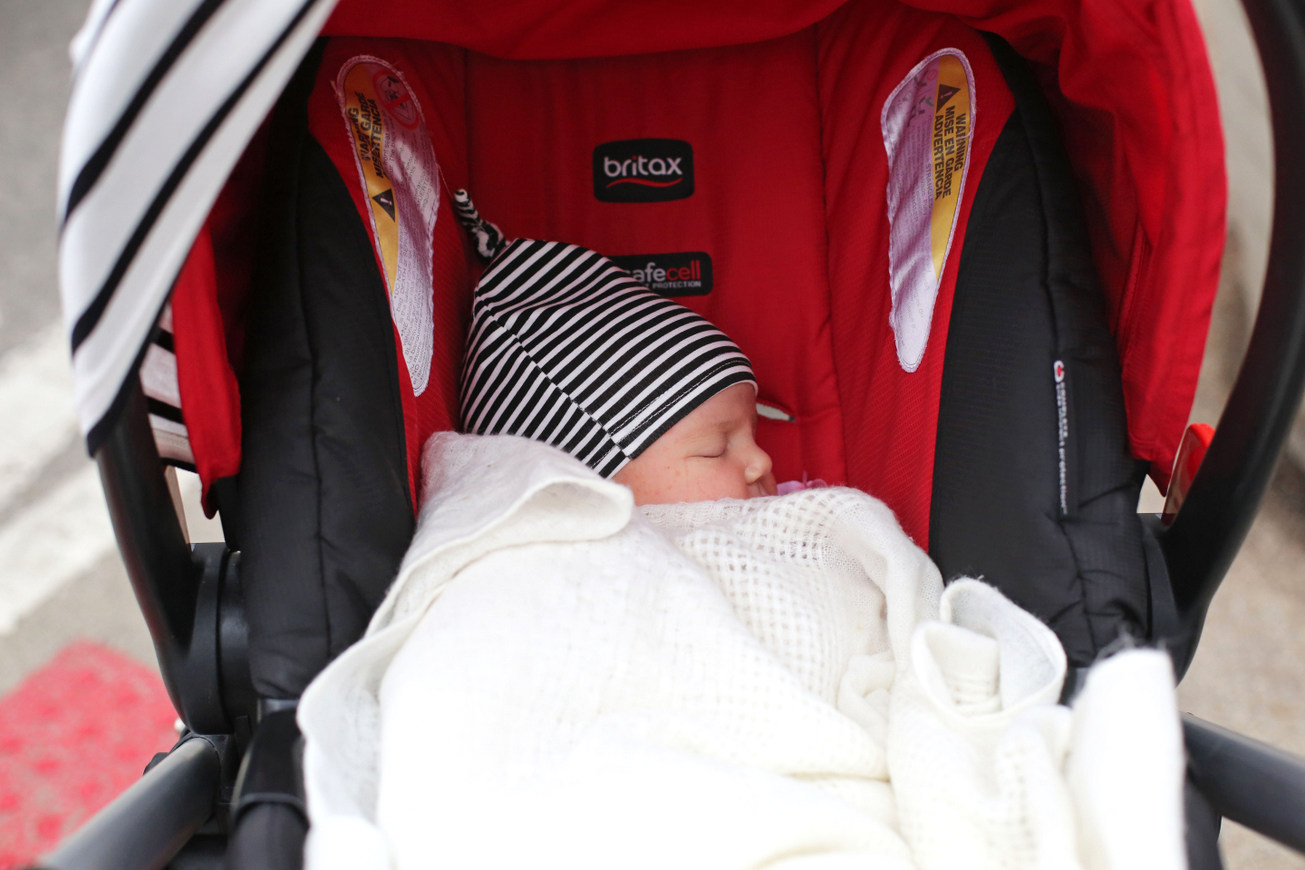 Adam knew a TON about New York, pointing out restaurants owned by famous people, movie locations, and various famous landmarks (after the fifth or sixth time he mentioned a place with great drinks, he finally burst out, “Do neither of you drink?” Jenica and I confessed that, no, neither of us did, and he responded, “I wondered why I was getting such a lackluster response about cocktails and margaritas and then lots of enthusiasm about chocolate shops and pastries”). 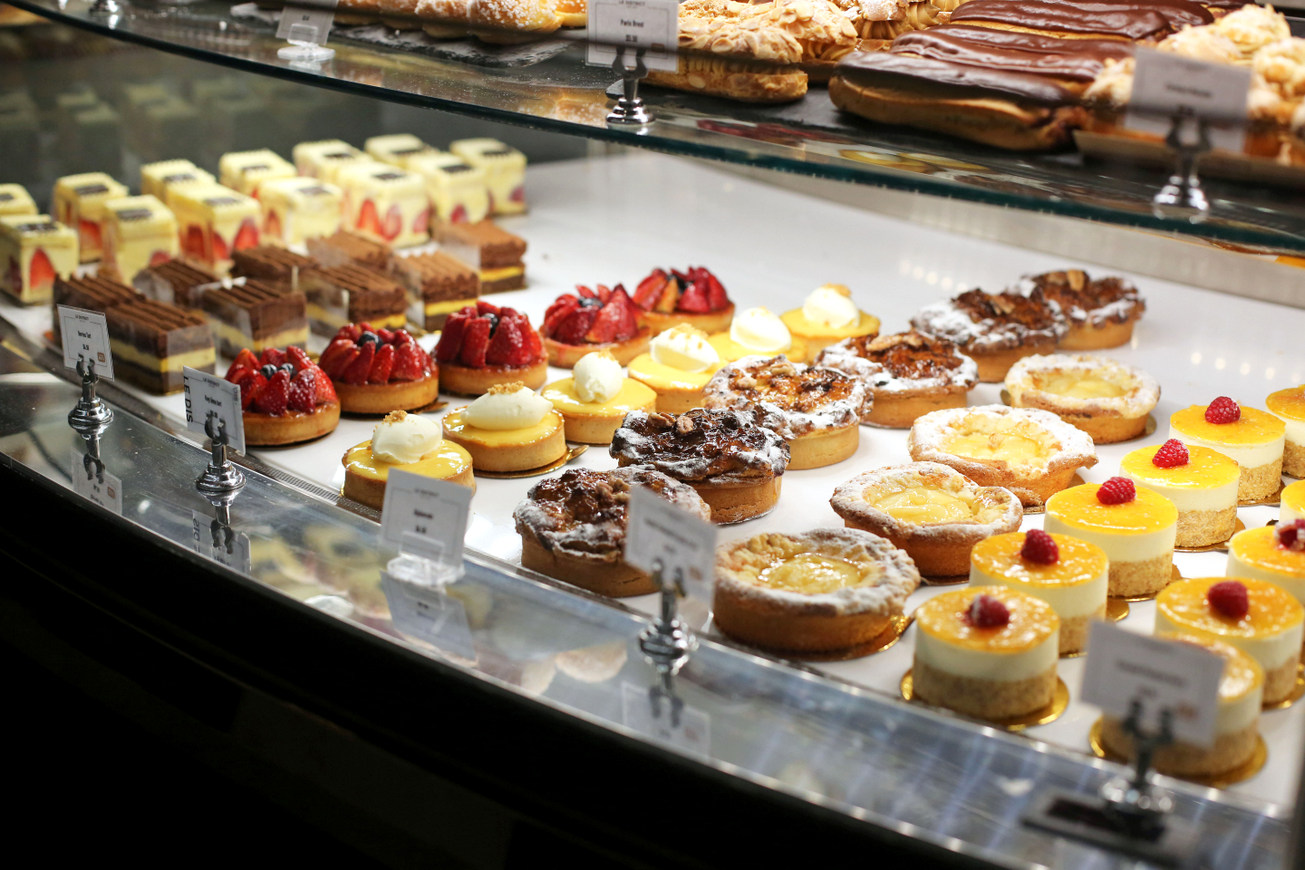 We also stopped to look at some posted real estate listings and then Jenica and I felt a little better about living in the suburbs with no cafes owned by Hugh Jackman within walking distance of our front door.

Jenica and I both were determined to have some pizza and at Hudson Eats we each got a delicious slice from SkinnyPizza. Plus it was nice to be inside and warm up a little.

At dinner, the staff kept commenting on how enthusiastic and fun our group was, which seemed so odd because it seemed fairly normal to me. After the third or fourth gushing thanks for being so involved, we were all wondering what kinds of groups they normally have. . .

The next morning, we headed to the YouTube offices in Chelsea Market and got to work with some professional photographers and a huge array of baby-related props, which was one of the highlights for me. Of course, I happened to have the cutest prop of all in the form of my snoozing baby.

After a quick lunch at the offices, everyone headed back to the hotel to grab their bags and catch cars back to the airport to fly home.

On the flight home, I finished another complete book (For the Love of Money which was more gritty than I normally read but SO fascinating) and ate all the Luna bars Bart had bought for me to pack in my diaper bag.

I arrived back at home just in time to see the three older girls before bed. They’d just gotten home from an outdoor movie viewing of Sing with Bart and his parents, and they all made a bee-line right past me and to the baby.

It was such a fun couple of days (and such a treat to have all that one-on-one time to snuggle Tally) and I’m already excited for my next trip to New York City. 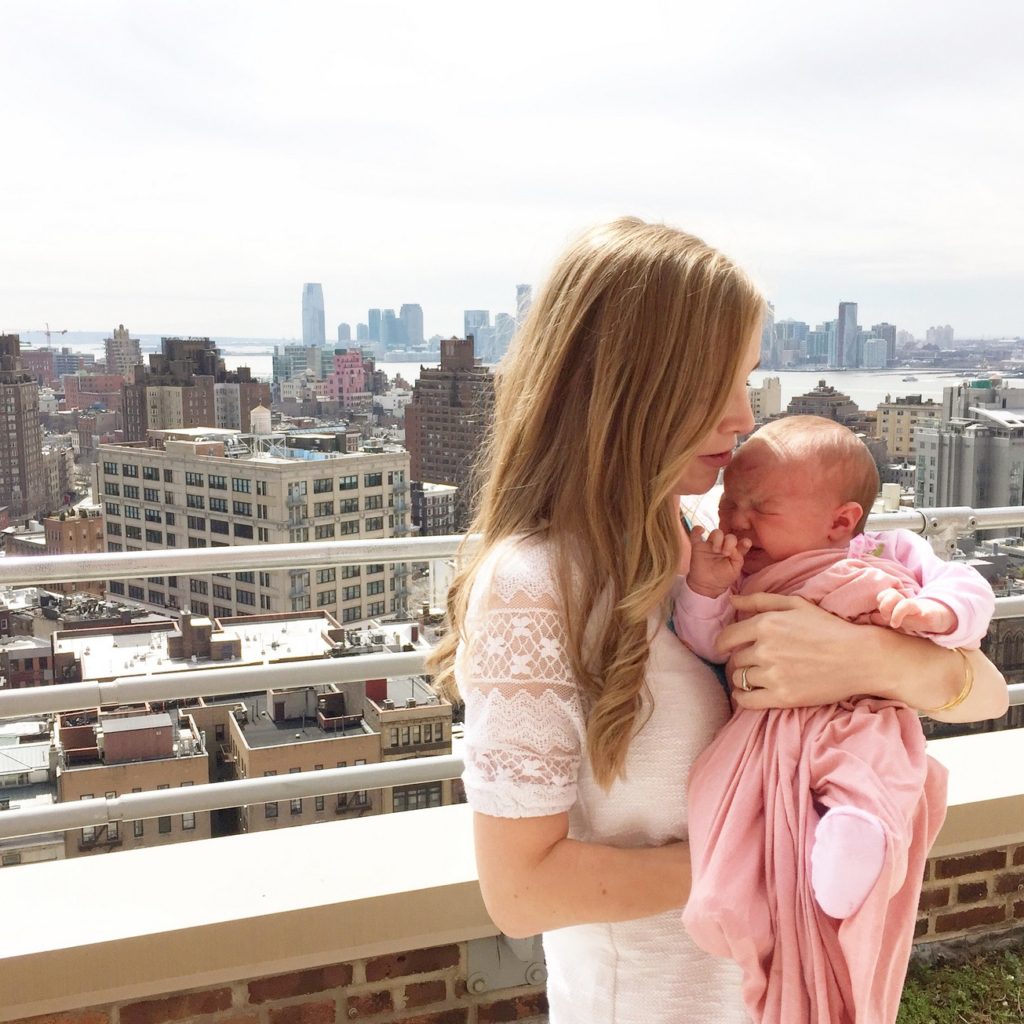 I’m hoping it involves the whole family because I’m dying to take all of the girls.

I hope my girls enjoy being together as adults as

This weekend, my siblings and I are spending the w

The secret sauce behind my blog? Analese, my virt

I have LOVED reading UPSTAIRS AT THE WHITE HOUSE t

Have you ever requested that your library purchase

We waffled about having a fourth baby from pretty

Do you have a child who is a worrier? One of my m

Next week is MARCH! Which means a new book for #e