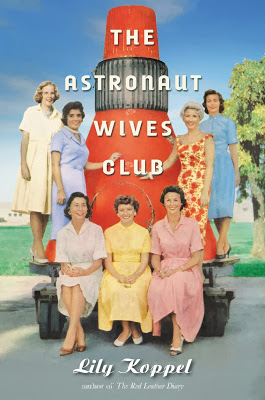 Generally when I write about a book, it’s because I absolutely love it and think a lot of other people would enjoy it.

Very rarely, I write about a book that is so bad, I need to express my rage about it.

And then, sometimes, I read a book like The Astronaut Wives Club that falls somewhere in between.

I’m not strongly recommending it, but I didn’t hate it either. I guess I just have things to say.

To start with, the space race and NASA are particular interests of mine (my nerdy interests – they just keep coming). My dad introduced me to Tom Hanks’ incredible HBO series From the Earth to the Moon when I was in high school, and I’ve been fascinated ever since. I’ve watched the entire series (12 episodes) probably 5 or more times. Bart and I watched it together when we were engaged and he liked it just as much as I did.

Seriously. Go find a copy and watch it.

Right, back to the book.

The concept was fascinating to me. You have these astronauts who are the faces of the US’s big push, thanks to JFK, to make it to the moon. They are instant celebrities, chosen to be All-American heroes. Which meant, of course, they needed to be clean-cut and have happy home lives.

Life Magazine got an exclusive to do huge stories on both the astronauts and their wives, which included a payout of some $70,000 to each of the astronauts. For families who had been living on $7,000 military salaries, this was like hitting the jackpot. And aside from the money, there were all the perks that came along – trips to the White House, free sports cars, planes for the astronauts to commute between Texas and Florida, etc, etc.

The wives knew how important it was that they present a good front to the American public. For instance, one of the original Mercury Seven had been unfaithful to his wife before he was chosen, and, after twelve years of marriage, she’d left him. A few months later, he came to her and said, “It looks like I’m eligible to be chosen to be one of these astronauts. But they won’t pick me if I don’t have a happy, stable marriage. Will you come back?” She did. And he was picked. They held their marriage together for over a decade more (they eventually divorced).

And he wasn’t the only unfaithful one. Although the book doesn’t spend a great deal of time on it, you get the impression pretty quickly what a fast life a lot of these astronauts were living while they spent the entire week, every week, away from their families in Florida. Of all the couples the book follows (49), apparently only 7 made it through married (this doesn’t count the 8 astronauts who died, so really. . . it’s 15 who didn’t end up divorced).

Of course, those sorts of marital problems were only a piece of the problem. Most of these guys had been test pilots before they were astronauts, so the death toll was astoundingly high, and being an astronaut was just as bad. You knew your chances of being widowed were enormous (Marilyn Lovell asked the director of NASA just before Apollo 8 – the flight that was the first to orbit the moon – what the chances of her husband coming home were. He told her 50-50).

And having to deal with the stress of regular marriage plus extreme risk was made all the worse by it playing out in front of the entire country (and world).

The Astronaut Wives Club was full of fascinating stories, interesting details, and real-life people trying to deal with a life they never could have expected. It made me want to learn more about NASA and the space race and the sixties (the decade of the 20th century I find most fascinating).

But there were just too many people it was trying to follow. First you had the Mercury Seven astronauts and wives. The the New Nine and their wives. Then 28 more (14 wives and 14 astronauts) and then another set of 19 astronauts.

No WAY are you keeping track of all of those people. I even knew the names of MANY of the astronauts and some of the wives, thanks to From the Earth to the Moon and I still couldn’t even begin to keep track. You got such tiny bits of each person, that they all kind of blended together for me.

And the book jumped around quite a lot, so it was hard to really even tell what mission you were reading about or what astronaut or wife.

I wished it had focused just on one set of the astronauts and wives (or maybe two) – all of them was just too many. I wanted to know MORE about each one of them, not just a sprinkling of stories of women I couldn’t keep straight.

The astronauts were incredibly competitive with each other as they jockeyed for positions on various flight lineups, which bled over to the wives, and there was a fair amount of animosity between groups, as each new group of astronauts that joined NASA reduced the money coming in from Life Magazine, and diluted their stardom. They lived near each other and some of them were close friends, but in the end, when the author reported that, in interviews, several had said this was the best time of their lives, I could hardly believe it. Exciting, yes. But mainly stressful and isolating.

And I didn’t feel any sense of really getting to know these women at all. Instead, they all felt very distant and removed. It was interesting, but not engaging in the way I wanted.

The Astronaut Wives Club has been getting an enormous amount of press, so I’m curious to see what other people have thought. Anyone else read it yet?