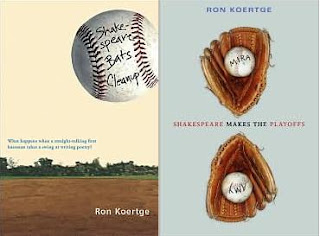 9 of 10: I am still fairly new to books written in verse, but Shakespeare Bats Cleanup and Shakespeare Makes the Playoffs are among the best. A quick and delightful read.

I doubt I would have picked up Shakespeare Makes the Playoffs at ALA if the two women in front of me at the booth hadn’t both exclaimed with joy when they saw it. That’s enough of a sell for me, generally, so I picked up a copy too.

Of course, when I got home, I realized that it was the sequel to a book, so clearly I needed to read the first one before reading the second. It took me a long time to get around to requesting the first one, but once I finally had it, I read both the first and the second book in one week. They were delightful.

The first one, Shakespeare Bats Cleanup, begins with Kevin coming down with mono and ending up stuck at home for a month while he recuperates. His dad is a writer and works from home; they have a close relationship, but they also give each other a fair amount of space. Kevin’s dad gives him a composition book, suggesting that perhaps Kevin might spend some of his homebound time writing. He nabs a book about poetry from his father’s study and starts writing in his book, experimenting with various forms of poetry, from sonnets to haiku to blank verse.

As the story develops, you learn that Kevin’s mom died recently and that he and his father are both dealing with the after-effects of her passing. The poems are by turns heartbreaking and funny. They’re just what you’d imagine a (somewhat more awesome than average) teenage boy might come up with.

This one, titled “Back to the Past,” I especially liked:

Mom bought the glove for me.
Not for my birthday or a bunch
of A’s. Not for anything really.


We just went to Sports Chalet
one night and tried a few on.
Bought the Wilson A2K,
top of the line, as good as it gets.


I told her I was fine with my
old glove.


But she said, “No, I want you
to have something that will last
a long time.”


Now I’m pretty sure she knew she
was sick. I’ll bet she was afraid
that she didn’t have

Both books were just terrific. I loved the variety of styles, the range of topics, and Kevin himself. He dealt with various situations in ways that seemed, to me, so very realistic. I hope there’s a third book.

Shakespeare Bats Cleanup obtained from my local library and Shakespeare Makes the Playoffs from the publisher at ALA Midwinter in Boston.