If you want things to happen, you should probably be friends with me Ralphie.

She suggested last spring the idea of having a little co-op school for her youngest daughter, Ella, and another child or two. And then, like magic, a schedule, a general agenda, and another willing mother/child combo were ready to go in September.

Three two-year-old girls is a really reasonable amount to handle by yourself, it’s nice to have one flexible week (like the week I was in Portland and so I just pushed my day back a week), and overall, it’s been a smashing success so far (by which I mean that at the end of my first week in charge, I had three breathing, non-crying children. Maybe my standards are low?).

Also, I quite enjoy dropping Ella off twice a month for a couple of hours.

Each of the three moms has different areas of focus (although I’m sure there ends up being quite a bit of crossover): Ralphie does music and art, Cara does numbers and science, and I do literacy and cooking.

It’s been fun to put together two hours worth of activities and I thought I’d share them here each month. 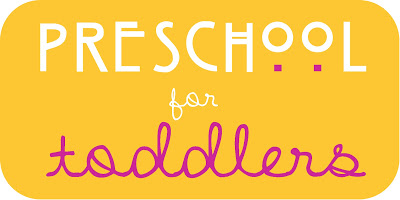 In September, I went with an ice cream theme, basically because I felt like making ice cream. Erm, I thought ice cream would be a very educational and emotionally-meaningful theme.  Something like that.

We started out by reading a couple of books about ice cream. Because what could be better than a combination of books and ice cream (nothing).

These are three I’d recommend:

Then I set up these boards and we talked about the letters on the bottom of each board. 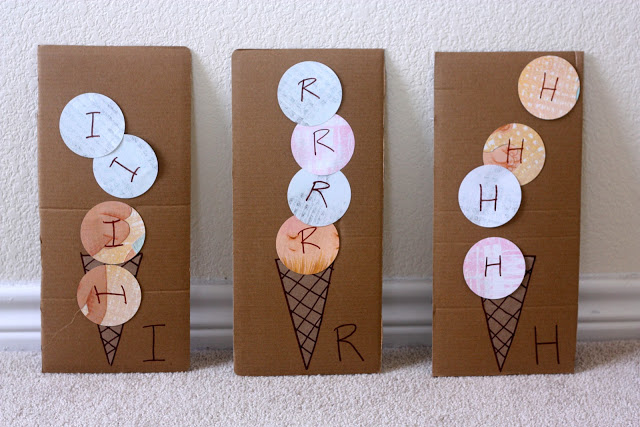 I had a big bowl of the ice cream letters and they took turns drawing them out of the bowl and taping them to the correct board. This was a little harder for them than I’d expected so. . .we did not do the next game I had planned which was upper and lowercase matching. There is just no way that would have happened.

Next, we got out the playdoh and made letters out of them.

Then, the part that really really excited them – we made this Peach Cobbler Frozen Yogurt. I went with this recipe because it was reasonably healthy and I’d prepped the peach sauce and cobbler parts the night before (I halved the recipe and just used regular plain yogurt instead of Greek because I am a cheapskate).

I let them help me stir the peach sauce into the yogurt and pour it into the ice cream maker and then, later, when it was getting a little harder, they crumbled in the cobbler portion. Two of the three girls were FASCINATED and just wanted to stand at the table and watch it go around and around.

After a bit, we moved back to the living room while the ice cream churned, and played a little game where I had a large bowl of pom-poms in the middle and then a smaller bowl for each girl. I went around, giving them a color, and they would scoop a pom-pom of that color out into their own bowl. This was a wild success and we did it a couple of times. 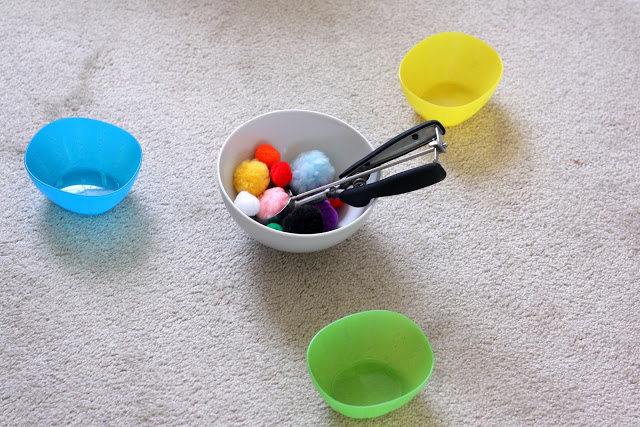 When the ice cream was done, I served each girl a little bowl. Ella was just beside herself with joy and ate two full servings (that’s my girl!)

And at the end, we pulled out toys and they played for the last twenty minutes. Success!

Previous Post: « Make Me Happy
Next Post: Pretending I Think I Only Have Seven Weeks to Go »