Flushed with the success of our Mission Impossible birthday party, Bart and I decided it was time to host another event.

A few weeks earlier, Bart’s office had done some Minute to Win It games and Bart came home, wanting to recreate it with some of our friends.

This? Not a party to throw together an hour before people arrive.  But then, Bart and I feel strongly that if we’re going to make people get a babysitter, we’d better make it worth their while.

We invited seven other couples (for a total of sixteen people) and specified that children were decidedly not welcome (loved, but not welcome).

Bart and I spent an evening figuring out what events we wanted to do and finally settled on 12 different challenges. We did three rounds (four games per round) with each person participating in one round. We put all the names in a jar and randomly selected four people for each challenge, leaving the names out for the remainder of the round so everyone had a single turn.

I kind of loved the stress everyone seemed to feel at each challenge wondering if THEIR name would be picked for this particular event. You could see some people hoping they’d get picked and others saying little silent prayers that their name would be at the very bottom of the jar.

For each challenge, you received 3 points for being the winner, 2 for second place, 1 for third, and zero for last place. I made a poster with everyone’s name on it and you were responsible for tracking your own points.

Here are the 12 challenges we did!

minute to win it party

The fourth round, we let everyone select one of the previous challenges to do again. In some cases, only one or two people wanted to do a challenge, so other people would volunteer to do the challenge again without getting points for it (the people who were doing it for points got the points associated with how well they performed). Some games had no takers for a second round and in some cases we had to do two rounds to accommodate the people who wanted to participate (Card Throwing, M&Ms and Straws, and Magic Carpet were particularly popular).

We had a whole bunch of prizes (each one in the $3-5 range) and the winner of each of the challenges could pick a prize. If you were a winner more than once, you could either exchange your gift or steal someone else’s gift (that person could then pick a new one). Not everyone got a prize, but more than half of the people did. 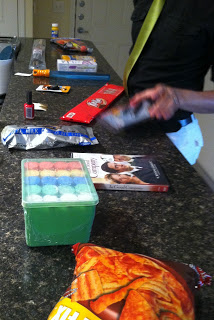 As hostess, I felt it was my duty to come in absolutely dead last. I got a whopping ONE point. I hope everyone appreciated this.

And because you can’t have a party without food (and Oreos eaten off your forehead do not count), this Texas-style blueberry cobbler and ice cream finished off the night.

Five minutes after everyone left, Bart said, “Okay, what kind of party are we having next?”