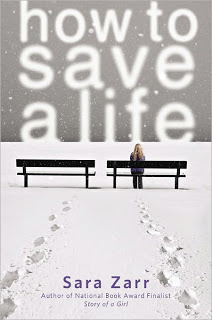 One of the problems with reading a lot of books, especially within a specific genre like contemporary young adult literature, is that after awhile you start to feel like every book is just a repeat of something else.

Sara Zarr’s books are the opposite of that. How to Save a Life, in particular, has many elements that I’ve seen before – dead father, pregnant teenager, to name a few – and yet this book is so unlike other books with those themes. I mean, really, it’s almost like showing off, that’s how well she makes it work.

Also, I’ve read a really huge number of books this year with multiple narrators and without fail I struggle to keep them separate. This could perhaps be due to a lack of brain cells, but I’m also inclined to think it’s because many authors simply aren’t strong enough writers to have two very distinct voices (note to authors: changing the font for each character is not giving a character an individual voice).

But here again, she pulls it off with aplomb. I never once had to look at the headings to tell who was narrating a chapter. The voices of the two teen girls were as different as can be, without resorting to lazy shorthand like having a character use really obvious speech patterns/accents/phrases (so lazy!). Really, I have no idea how she made this happen – what it was that made the voices so distinct – there was nothing, to my eye, obvious about the differences except. . .they were different. It’s like trying to explain how you can tell apart the audible voices of two women from similar backgrounds. You can’t put your finger on it; they’re just distinct.

Oh, you were wondering about the actual storyline of How to Save a Life? Forgive me, I got caught up in my love for Sara Zarr.

how to save a life by sara zarr

There is Mandy. She’s seventeen and pregnant. Her mother got pregnant early and has made it very clear to Mandy that life as a single mother is pretty much the worst fate there ever was. Mandy wants better for her baby and she thinks the McSweeny family is the ticket for this baby to have a better life.

She found Robin McSweeny through an open adoption message board, so the adoption is all going informally, with no lawyers, no social works, just an agreement made between the two of them via email. Mandy is leaving the Midwest to come and live with the family in Denver until the baby is born. And then, well, the plan sort of ends there.

And there is Jill, Robin McSweeny’s daughter, a senior in high school, still reeling from the death of her dad nearly a year earlier. She’s always been a little on the prickly side but since her dad’s death, she’s become insufferably so, pushing away her mother, her boyfriend, and her friends. And now, with her mother suddenly set on adopting a baby, Jill feels even more marginalized.

She also feels angry. What is her mom thinking? Is she just trying to replace her dad? What is a new baby going to solve? And of course she is very leery of this whole unofficial agreement – she is certain this girl is just going to try to suck her mother dry financially.

And her doubts are not quenched when Mandy arrives and it quickly becomes evident that she’s not actually as far along as she’d said she was. And the boy she’s expecting is actually a girl (not that Robin cares if it’s one or the other, but the misinformation makes Jill even more anxious).

It’s a pretty tense situation all around, as you can imagine.

Jill also meets a guy at her job who went to high school with her (she has very little memory of him, as he was a few grades ahead of her and they only had a single class together), and she finds herself fixated on trying to remember who she used to be before her dad’s death became the defining characteristic of her life. Can she ever be that girl again? And how, after cutting off all her friends and family, can she take steps back to repairing those relationships? She sees, quite clearly, how awful she’s become, but changing that now seems nearly impossible.

And Mandy is struggling too. This new life in Denver both delights and intimidates her. How is she going to walk away from it after the baby is born? How can Jill not see how lucky she is to have a mother that loves her, to have money and a future? Can she make a life like this for herself?

One of the things that really impressed me about this book is how real and rich the minor characters are, considering that many of them are present only in the memory of others (Mandy’s mother, Jill’s father). You feel like you know them. And you love them (or, in the case of Mandy’s mother, you find her rather despicable).

And some of the information about the past is reeled out slowly, but it never feels like you’re being manipulated as a reader. I could sit back and let the characters develop before my eyes.

Like all of Sara Zarr’s books, I wasn’t sure where things were going to go. But I’ve read enough of her books to know that however things played out, it’d be a satisfying ending. It wouldn’t be so perfect it felt contrived, but it wouldn’t be so horrible I wanted to throw the book down in despair. Whatever happened would feel right.

if you liked this review of how to save a life, you might also like these other book reviews: