Last Thursday, I left directly from work to the airport. I caught a flight to Salt Lake City and was kindly picked up by my father-in-law, who drove me back down to Provo. I had a midnight dinner with my in-laws and went to bed in their very dark guestroom (you will never get such a good night sleep, as you will wake up at 10:00 a.m. and it will feel like the middle of the night).

The reason I was flying across the country on a weeknight was because it was my dad’s 51st birthday this weekend. Last year, Bart and I went to Las Vegas for his 50th birthday bash and good times were had by all. This year, my mom called me a few weeks ago and asked if we’d like to come to Salt Lake and spend the weekend with the family, as they’d be there for Dad’s birthday and they’d also be going to see Frankenstein, which my sister Landen had done all the costume design for.

It took me about half a second to say yes.

It was a bit complicated by the fact that Bart was out of town last weekend and it was a little unclear whether or not he’d be done on Thursday or Friday, but after 9 (no exaggeration) different tickets on Southwest, we got it straight and he flew in from Minnesota on Friday afternoon.

I spent the morning on BYU campus with Landen, feeling so nostalgic it hurt, and then an hour or so with various members of Bart’s family, until my mom called to say “Dad’s in the bathroom, so I’m calling to tell you that we’re here in Provo and you should show up at the costume shop.”

Oh, that’s right. He didn’t know we were coming. There is nothing my family likes more than a good surprise.

I walked into the costume shop and Landen was facing me; my parents had their backs to the door. Landen (who I’d seen that morning), waved at me and my parents both turned around to see who she was waving at.

The look on my dad’s face was priceless. He said later it was like an out of body experience.

We headed up to Salt Lake for a big birthday dinner at my grandparents’ home, as I lied through my teeth about Bart being in Minnesota (he had just landed in Salt Lake). He arrived minutes before we did and when he walked into the living room, we got to watch my dad’s jaw drop a second time.

It was a delightful, wonderful weekend, full of my favorite people, an excellent stage production, and a nice flight passed by reading good books. I’ll have to start saving my pennies to fly out next year.

P.S.: The most amusing part of the weekend was this conversation between me and my four year old niece:

C: Are you pregnant?
Me: No.
C: Well you will be soon. And then that will be a cousin for me. And you and Bart and my cousin can move into my basement.

I’ll have to think about that basement offer. 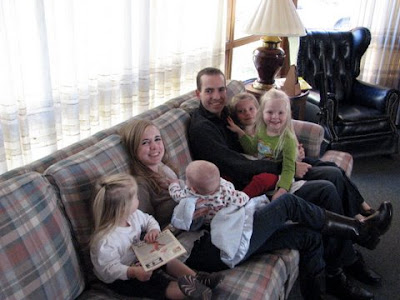 Previous Post: « These Is My Words: The Diary of Sarah Agnes Prine by Nancy E. Turner
Next Post: Picture Day »