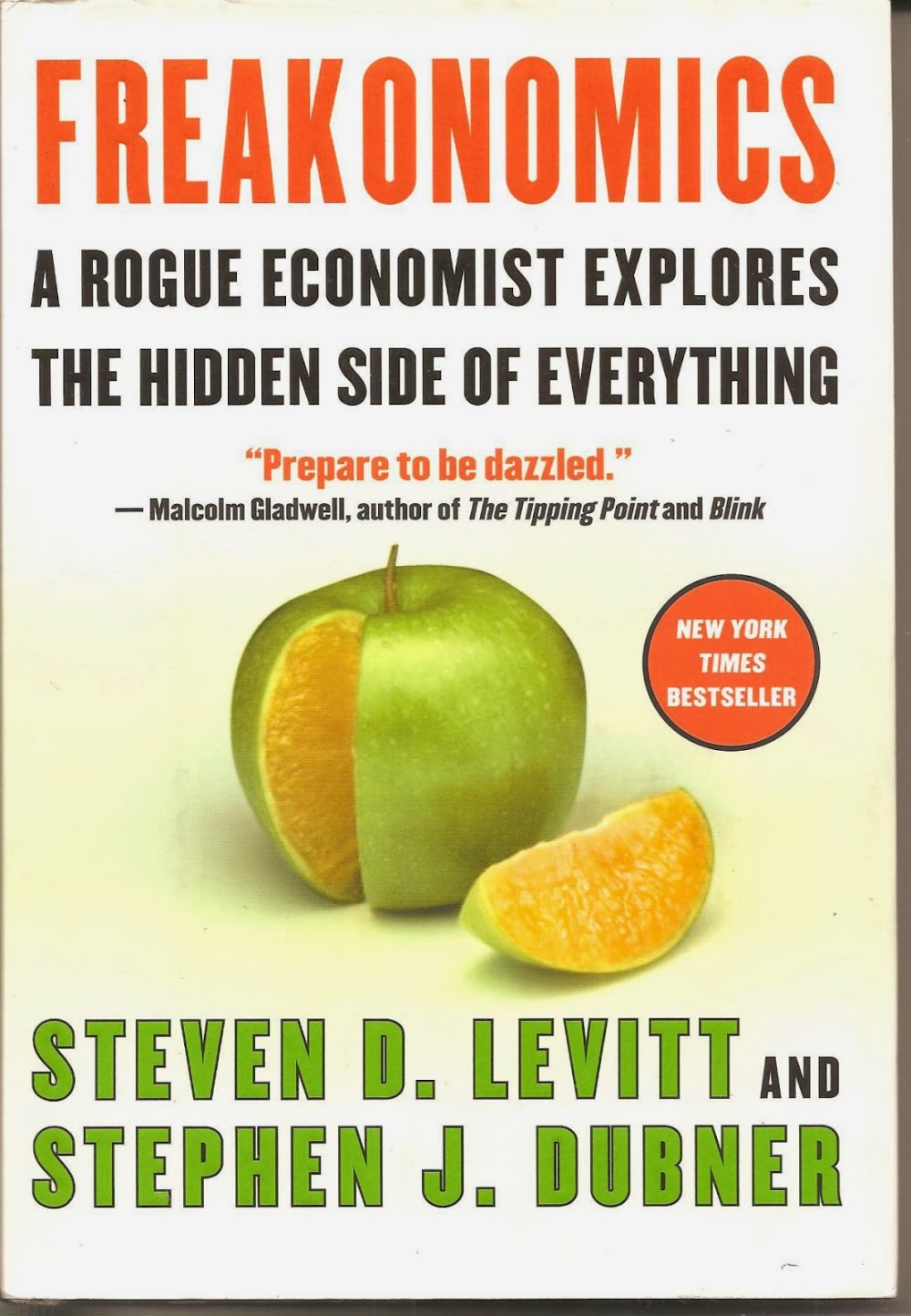 Much as this blog may convince you otherwise, I do occasionally read an adult book. Sometimes I manage to extricate myself from the comforting short shelves of the juvenile section and venture upstairs to the grown-up books. Freakonomics was well worth the trip.

Freakonomics mentions in both the introduction and later in the body of the text that there is no unifying thread, which is pretty accurate. This makes it difficult to write about, certainly, since it’s really more like reading a collection of essays, rather than a book. If there is a central theme, it’s incentives and cause and effect – what causes people to do things and how one decision or legislation can make an impact decades later.

On the Freakonomics book flap it says that the reader of the book will have “enough riddles and stories to last a thousand cocktail parties,” and that is certainly true. There is a chapter about the Ku Klux Klan and how they are similar to real estate agents in that their main power is information (once the information is freely available, those groups lose their prestige and mystique). Another chapter discusses how the drug dealer system is set up nearly identically to any Fortune 500 company. The final chapter talks about if and how names affect children, how and why names come in and out of style, and what role race plays in naming a child. You could carry on a interesting and intelligent conversation about any page in this book (unless you’re one of those really obnoxious know-it-all conversationalists); it’s just that excellent.

Some of the chapters were more fascinating to me than others (I was much more interested in teachers that cheat for their students on standardized tests than in sumo wrestlers, for instance), but all of it is interesting and surprising. One story in the Freakonomics book talks about how a preschool had a problem with parents picking up their children late, forcing teachers to stay late without additional compensation. The program instituted a fee for failing to pick up a child on time. The parents usually paid about $380 per month per child; the late fee for picking up a child late was $3 per incident. Once the fee was put in place, the number of late pickups doubled. Clearly, the incentive had backfired in a major way; rather than feeling rushed and guilty, parents could stay at work or an appointment a few minutes later and leave when it was convenient, without feeling guilty since they were paying the fine. Who would have guessed?

A few of the conclusions that Levitt draws will probably be disturbing to some readers. Why did the crime rate plummet in the 1990s? Why, because all the children who would have turned into criminals were aborted thanks to the passing of Roe v. Wade, of course. Which of these factors is correlated with low school test scores and which one has no correlation: low birth weight and frequent television watching? Low birth weight corresponds with low test scores; TV watching doesn’t matter. Even if you find his findings distasteful, though, you can’t help but respect them – he clearly lays out the facts and then weighs the costs and benefits of the causes and the effects.

Freakonomics is an excellent book, and I would highly recommend it to virtually anyone. It was just so gripping. Plus, you’ll have a lifetime of good dinner party stories (assuming you go to dinner parties).

Previous Post: « Finally Getting Back to Normal Life
Next Post: I’m an Animal, I’m a Robot, I’m an Anibot »