I would not consider myself a particularly amazing driver, but I have taken and passed several driving tests, so I feel confident in saying that when you approach an intersection to make a left hand turn and you are confronted by this sign: 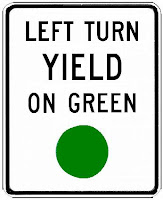 you should not be very surprised when the guy in the lane across from you goes through the light. Moreover, cursing loudly and flipping him off for having the audacity to go straight when he has a green light, might be a rather inappropriate action seeing as you were the one trying to break the law by acting as if you had a green arrow.

Also, when you are on the freeway and the guy in front of you is rudely going only EIGHT miles over the speed limit while you want to go about twenty-five over, riding his bumper for four or five miles before getting over, screaming obscenities and waving a certain finger as you pass, might not really impress anyone much. Particularly when you have a hilariously awful seventies mustache and are driving a bright blue VW Beetle, otherwise known as the least intimidating car ever made.

I mean, I’ve heard about that whole Boston Tea Party incident, so maybe flagrantly flouting the law is just a centuries old Massachusetts tradition. But it doesn’t exactly endear you all to the newcomers (you know, those of us who learned to drive in places where people generally obey the law and don’t get up in your face when you try to drive like a normal person).

I’m just saying, the phrase “New England Hospitality” is not one you hear a lot, is it?

I didn’t think so.

Consider what we’ve talked about.