Two weeks ago, Bart had training in Houston (the same kind of training he had in Dallas last summer).

He flew out on Sunday night, and Ella and I planned to drive down later in the week. I just wasn’t up for a full week in a hotel with a small child, and I wanted Bart to scope out the sleeping situation first (aka, would there be another enormous closet for Ella to sleep in).

No, there was no crib closet.

I still went. I probably should be awarded a badge of some sort.

I was mega-worried about the car ride down because Ella is not really a fan of the car for long periods of time, and three hours with just the two of us sounded pretty awful. Also, it rained like mad, so I was pretty nervous about the driving itself (much praying for the first hour as we drove in ridiculously rainy conditions, clear skies for the second two hours).

But actually, she was extremely good, only freaking out the last five minutes when Bart called to see where we were and he hung up without letting her hug and kiss the phone goodbye.

She clearly wasn’t ready to repeat the car ride, though, because when we arrived, Bart said, “Let’s go get dinner, Ella” and she said” Not da car! Not da car!” Fortunately, we were right downtown and just walked across the street to grab some food.

Ella found herself quite taken by the whole staying-in-a-hotel thing, actually. When she walked into the hotel room, she looked around and said to Bart, in a very matter-of-fact voice, “I like it.” And later, when we were eating our picnic dinner on the hotel floor, she took the first sip of her milk and said in this quiet little voice, “I YUV it.”

We put her crib behind the blackout curtains against the corner, and all was well until we put her in there and she started shrieking, “I not YIKE IT! I wake up!” Bart went in and told her what a cool little room it was and how she could sleep in there, and then after one last snuggle from me, she went to sleep relatively quickly and with no more crying. Hallelujah.

The next morning, it was ridiculously rainy, and yet, for a bookstore, I took our lives into our hands and we drove about 15 miles to the Blue Willow Bookshop where I’ve been aching to visit for years and that also had a free storytime on Thursday mornings.

The bookstore itself is tiny, but it is jammed with fantastic titles, and Ella and I both thoroughly enjoyed ourselves. So much so that, after an hour and a half, when we needed to head back to meet Bart for lunch, Ella cried and cried about having to leave (and asked for the next two days if we could go back). 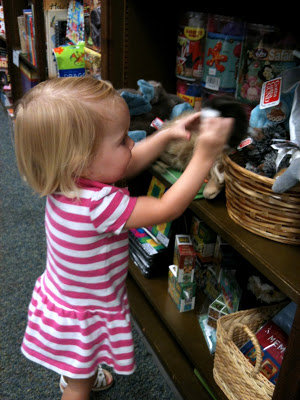 After lunch, Ella and I headed back to the hotel, and she screamed so much about taking a nap in her “little room” that I finally let her lay on the bed with me and she slept for about an hour.

I was thinking a cookie sounded really good, so we got one in the lobby and then headed out for a little walk to the downtown library. 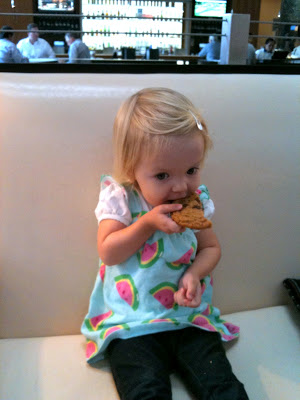 It was a fine library, although not as nice as the Dallas one. Ella
enjoyed the giant stuffed bear and searched the shelves until she found a
book about a bear and sat down and read it to him (I think he liked
it). 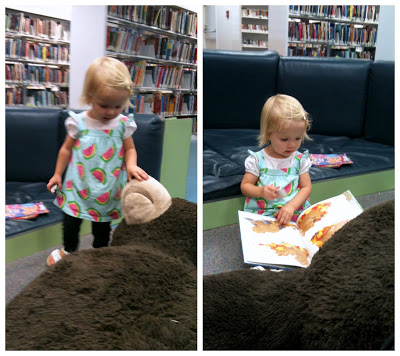 On the way back, she got herself absolutely soaking wet in some fountains. I refused to carry her the last couple of blocks because she was SO wet.

Back at the hotel, we were going up the elevator and one of the maintenance workers exclaimed over how darling Ella was. Then he asked if he could send her some milk and cookies, took down our room number, and twenty minutes later, with Ella now in dry clothing, a woman from room service knocked on our door with a big stack of cookies and a glass of whole milk. You can bet it was the highlight of Ella’s year. 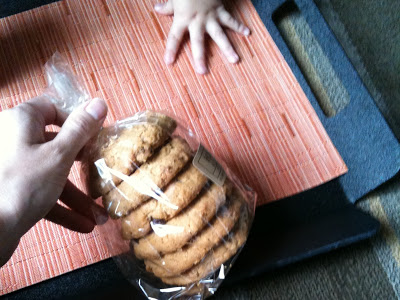 We don’t know a lot of people in Houston, but one of the son’s of some very close family friends and his wife live down there and we’d arranged to meet them for dinner. They suggested Benjy’s and this was not a bad choice. It was especially great because they dropped the ball a little bit with our waiter (some mix up about who was assigned to our table) and so we got a free appetizer (calamari – when Bart told Ella it was an octopus, she looked at his face very closely to see if he was joking) AND a free dessert sampler which was divine.

I got a short rib pizza with fried egg and crispy onions, and it is one of my greatest regrets in life that I could not finish the entire thing.

We had a lovely time visiting, with lots to talk about (books, work, babies – they are expecting their first in a couple of weeks), and I was delighted we’d gotten together.

After we’d successfully put Ella to bed (with minimal crying), Bart and I watched some White Collar with headphones in. Ah yes, the glamorous life.

On Friday morning, Ella and I went to the Children’s Museum. The Houston Children’s Museum is one of the most highly-ranked children’s museums in the country and we were going to have to push back her nap until Bart was ready to leave because we had already checked out of our hotel room and Bart’s finish time was kind of fluid anyway.

This museum was pretty amazing. We didn’t even see most of it because I pretty much let Ella decide where we went and how long we spent there, and we spent much of our time in the Toddler section on the top floor (there were many exhibits that were just too old for her). Three and a half hours and she was just as happy as when we’d arrived (when we came into the toddler section after an hour or more in other parts of the museum, and she saw all the toys and activities just her size, she couldn’t stop saying, “Oh my! Oh my!”). 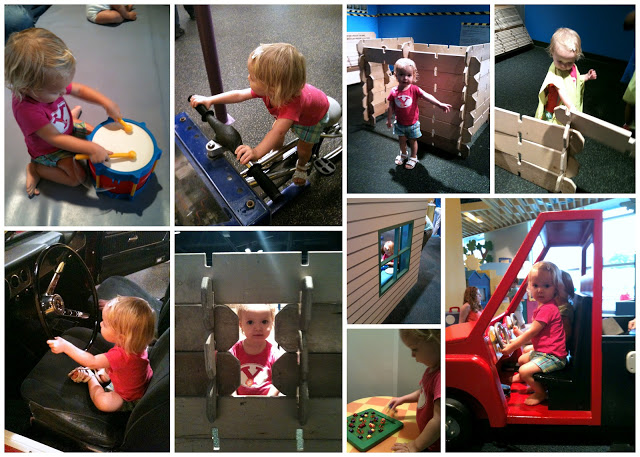 Bart called to say he was done, we picked him up at the hotel, and we were on our way home.

Ella slept two of the three hours home (love those reclining carseats) and then spent the last hour looking for cows. 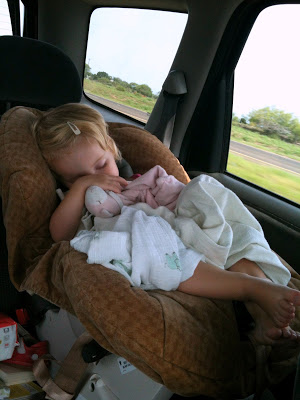 I love vacation. Ella loves being back in her “big crib.”