At Christmas, Bart’s parents announced that part of their gift this year was to take the whole family to Disneyland.

We’d planned on flying in on Tuesday morning, but then at the last minute we found out that the Disneyland portion of the trip was scheduled to begin on Tuesday morning and so someone would have to leave in order to get us from the airport. So, after some quick rearranging of our Southwest tickets, we opted to fly in on Monday evening instead.

Except when we got to the airport, we discovered that there was some wicked weather in Dallas and everything was getting delayed like mad. Our flight had been delayed three hours, which meant we wouldn’t even leave Austin until ten p.m. Not to mention there would be a connecting flight that we would almost surely miss. ALSO Ella usually goes to bed around seven p.m. and now it was looking like we might not get in until 3 a.m. our time. Which sounds fun, no? (Yes, we haven’t even gotten to the vacation part because I’m so busy telling you about the travvvveling part).

The lovely Southwest desk agent found us an alternative flight that put us in only around 30 minutes later (after the unpleasant desk agent told us we were in the wrong line and that we’d have to go all the way back to the end of the other looooong line. . . ).

To make this already long story at least a little bit shorter: two brief delays later, and two flights just barely not full enough to let us snag an extra seat for Ella’s carseat so she could sleep on both flights, we arrived at LAX, Bart’s parents picked us up and we drove down to Anaheim. When we pulled up the carseat cover, we discovered Ella wide-eyed and quiet in her seat (probably wondering WHY we were in a strange place at one a.m.). We tossed her in the crib and prayed like mad that she’d go to sleep. After a little rolling around, she slept until six a.m. (which was eight her time).

His parents had found a large house to rent about half a mile from Disneyland (we walked it a few times, but mostly Bart’s dad was nice enough to shuttle everyone back and forth by car). The backyard was quite large with a big pool, which made for some fun times, especially Ella who had never been swimming before. 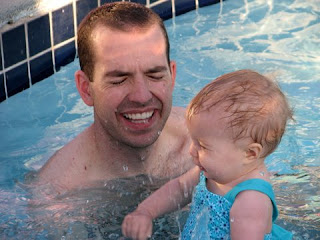 Anyway, three days of Disneyland. The weather was excellent. It was far busier than when we have gone with my family in the end of January, but we managed to make it on a number of rides and I was happy that there were so many things Ella could come on with us (Jungle Cruise, Pirates of the Caribbean, the heinous Ferris Wheel in California Adventure, Dumbo, the Carousel, Buzz Lightyear’s Astro Blasters, Finding Nemo, Pinocchio, etc).

We made quite a bit of effort to keep Ella’s nap schedule intact. She usually took a nap in the morning before we went to Disneyland and then a quick nap in the stroller while we were at the parks and then one of us would come back to the house with her for an afternoon nap. I was delighted by how well she slept on this trip, especially since we were in the same room with her during the night.

Bart’s immediate family now numbers 27 people, which made this Disneyland trip drastically different than when my immediate family went in 2007 and 2008, since we had only eight people and the youngest person was 11. We ended up breaking into groups for much of the time, with people going back and forth between the house for naps. And it was nice that Bart and I have been to Disneyland twice together and so we didn’t feel short-changed if we didn’t get to ride every single ride a dozen times. My main sadness was that we missed the new Toy Story ride in California Adventure.

The major disaster on the trip was when Ella chucked her beloved Texas Longhorn pacifier over the edge of her stroller and we didn’t notice it for a few minutes and then could not locate it on Paradise Pier. Also, do you have any idea how hard it is to buy a pacifier in Disneyland? And do you know how sad I felt when I looked through our pictures and saw the last recorded instance of her with it in (I am such a pathetic sap)?

The last day before we went home, everyone went to the beach, but Bart and Ella and I went to a different beach than everyone else because Ella was napping when they left. We headed out to Huntington Beach (snagging some In-n-Out burgers on the way), enjoyed walking through the market that was set up there, and finished up with a delicious Sea Salt Caramel cupcake from Lil Red’s. 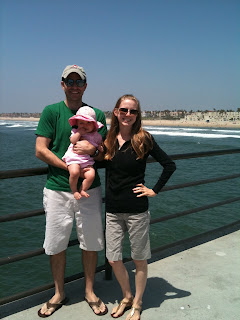 Ella sported a hat in honor of the royal wedding (with the side benefit of keeping her head from getting burned). She also approved of In-n-Out (we felt judged by people walking by watching us feed a hamburger to our child. I wanted a small sign that said, “At home we feed her organic bok choy!”). 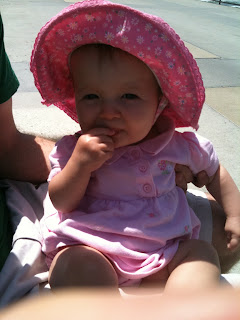 We were in charge of dinner the last evening, so I made six chicken pot pies (four of them curry and two of them plain), plus some watermelon and a salad. It is. . .very different to cook for 27 people than for three. I shall reevaluate my plans to have twenty five children.

Also, my goal on this trip was to avoid any sunburns and I think we did remarkably well (thanks to Bart’s sister for giving us a bottle of sunscreen).

Our flight home was nonstop, which was delightful, although it was so full that we couldn’t bring the carseat on and Ella had to nap on my shoulder, which meant it was a brief nap. And then we were home.

As my mom says every time we go on vacation, “It’s nice to go away; it’s nice to come home.”