On Thursday afternoon, the UPS man knocked on my door and practically collapsed under the weight of my BEA box.

And then it was like Christmas in my living room, as I pulled out book after book.

Should you happen to be curious, here’s a list of what came back from New York (and what is currently sitting on my kitchen counter): 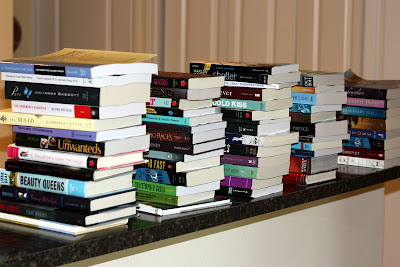 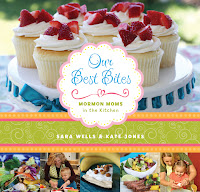 The Bonne Femme Cookbook by Wini Moranville
Welcome to Your Child’s Brain by Sandra Aamondt and Sam Wang
The Smart Pop Preview 2011
Our Best Bites Cookbook: Mormon Moms in the Kitchen

Glow by Amy Kathleen Ryan
The Queen of Kentucky by Alecia Whitaker
Crossed by Ally Condie (read this one on the plane home; the list of people borrowing it is already very long)
Following Christopher Creed by Carol Plum-Ucci
Rock On by Denise Vega
Wintertown by Stephen Emond
The Beginning of After by Jennifer Castle
The Rivals by Daisy Whitney
Abandon by Meg Cabot

Au Revoir, Crazy European Chick by Joe Schreiber
A Long, Long Sleep by Anna Sheehan
Forever by Maggie Stiefvater
After Obsession by Carrie Jones and Steven E Wedel
Between by Jessica Warman
Bunheads by Sophie Flack
Lola and the Boy Next Door by Stephanie Perkins
Cold Kiss by Amy Garvey
Legend by Marie Lu
Shut Out by Kody Keplinger
Daughter of Smoke and Bone by Laini Taylor
Why We Broke Up by Daniel Handler and Maira Kalman (read this one over the weekend; weird and sad, but I kind of loved it)
Strings Attached by Judy Blundell
Warm Bodies by Isaac Marion
Beauty Queens

The Future of Us by Jay Asher and Carolyn Mackler (read this one on the plane too. Great premise, a little light on plot)
Fracture by Megan Miranda
Open Wounds by Joseph Lunievicz
How to Rock Braces and Glasses by Meg Haston
The Scorpio Races by Maggie Stiefvater
Sirenz by Charlotte Bennardo and Natalie Zaman
Pretty Bad Things by C.J. Skuse
The Vampire Stalker by Allison Van Diepen
iBoy by Kevin Brooks
The Daughters Take the Stage by Joanna Philbin
Brooklyn Burning by Steve Brezenoff
Little Women and Me

Dumpling Days by Grace Lin
Around the World by Matt Phelan
The Secret Prince by Violet Haberdasher
Liesl and Po by Lauren Oliver
Wonderstruck by Brian Selznick
Icefall by Matthew J. Kirby
The Bridge to Never Land by Ridley Pearson and Dave Barry
Ivy and the Meanstalk by Dawn Lairamore
The Apothecary by Maile Meloy
The Inquisitor’s Apprentice by Chris Moriarty
The Unwanteds

by Lisa McMann
The Chronicles of Harris Burdick by Chris Van Allsburg (Merrick took this one home with her, but I can’t WAIT to read it)

Clearly, I’m going to be a bit busy for the rest of the summer.

Previous Post: « A River of Words: The Story of William Carlos Williams by Jen Bryant and Melissa Sweet
Next Post: The Little Women Letters by Gabrielle Donnelly »